Recently I was lucky enough to have a tour of the manufacturing facilities and museum of the Swiss Ammunition Enterprise, known more commonly as RUAG.

The company is divided into two separate divisions, and I visited the small arms ammunition plant in Thun.

Unfortunately I couldn’t take pictures inside the plant, but I took plenty inside the museum!  The main product made at Thun is the Swiss Army service ammunition, namely 5.6mm Swiss, although it has essentially the same dimensions as 5.56mm NATO.  This is also called GP90 by the Swiss, meaning Gewehr Patrone 90.

First I thought I’d give you a rundown on their ammo.  Originally it was adopted in 1987 as a replacement for the aging 7.5mm GP11 round used both in the Schmidt-Rubin and the Sturmgewehr 57.  Unlike NATO, the Swiss adopted an ordinary lead core projectile for their ammo.  Originally it had a nickel alloy jacket, but this was changed in 1998 to an ordinary copper jacket as it was found that the nickel jacket was wearing out barrels on the Sturmgewehr 90 too quickly.  The picture illustrates both projectiles, on top of a GP90 ammo box: 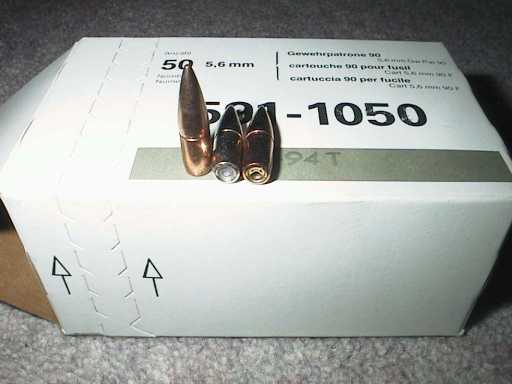 The original nickel alloy plated bullet is shown between two of the later copper jacketed bullets.  Note that the earlier bullet has an exposed lead base, while the later design has a plug in the base.  This was done apparently due to environmental concerns.

Without the steel penetrator tip of the NATO round, I doubt this bullet is as effective in terms of penetration, but it is very accurate, probably the most accurate full metal jacket 5.56mm round made.  The Swiss also use a 1 in 10 inches twist in their service rifles, rather than the NATO twist of 1/7.  This means longer barrel life, as there is less friction in the slower twist rate.  There is a theory that it will also be more lethal from the lower twist rate but Martin Fackler I think has put that one to rest (makes a difference in internal and external ballistics, but not terminal ballistics, provided the twist rate is fast enough to stabilise the bullet in flight).  In any event, I don’t think anyone has been intentionally shot with GP90 on a battlefield yet!

Some people seem to think that GP90 has a steel core.  I’m not sure where this rumour started, but it doesn’t.  It is definitely lead core, I saw the cores in the factory!  The following picture shows two partially completed bullets: 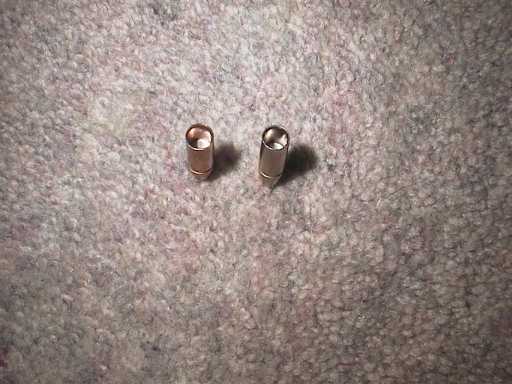 On the left is the later copper/steel (called “tombac”) jacketed bullet and on the right is an earlier nickel alloy jacketed bullet.  You can see the exposed lead core inside each jacket.  The bullet itself weighs about 63 grains, which once again indicates it has a heavy core.

SM also makes all the cartridge cases.  These are very high quality, and have a distinctive headstamp: 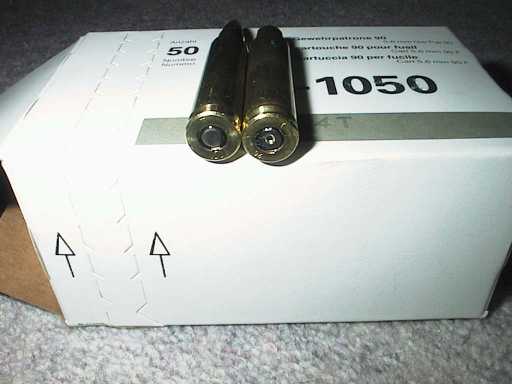 On the right is a fired GP90 case, the headstamp is a “T” (for Thun) above the year of manufacture, in this case “94”.  On the left is a round of commercially sold ammunition, this has a “T” above the calibre designation of “.223”.

SM doesn’t sell the GP90 ammunition on the commercial market (except to special order), although surplus GP90 is sold all over Switzerland at local rifle ranges for target practice.  They do however have a wide range of ammunition available to the general public, which you can see on their website.  They make the Blaser line of ammunition for example.  I have purchased some of their target load, the Swiss P: 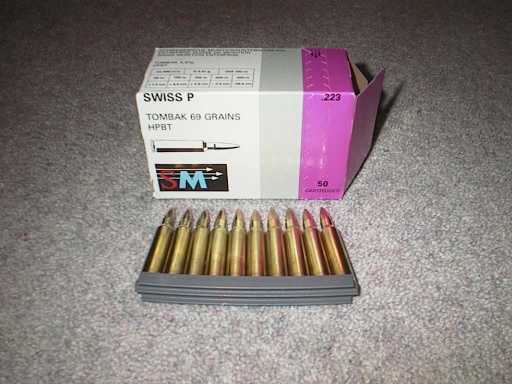 It comes in the same size box as the GP90, and is even on stripper clips for the Stgw 90!  It is essentially identical to GP90 but uses the Sierra Matchking bullet instead.  At the factory I was told that they have now developed their own .223 match bullet that is more accurate than the Matchking, this I will have to try!  Even so, this stuff is the most accurate factory .223 I have ever used, more accurate even than Federal Gold Medal, although I have to admit I haven’t shot enough of both to determine if that is simply a fluke or statistically accurate.

One point: if you have thumbs strong enough to load a Stgw 90 magazine using these stripper clips you must look like King Kong!

It’s difficult to describe the plant without pictures.  Mind-blowing is not too strong a description.  Everything is automated, from melting the lead into lead cores, shaping the bullet jackets and inserting the cores and closing the bases, forming the cartridge cases, waterproofing them, loading the primers, (I was particularly impressed with the machine that seals the primer in) to putting the powder in the case, loading the bullet, pushing the completed rounds into a rack where they are then pushed onto the stripper clips, and then loaded and sealed into boxes.

The machines that make the cartridge cases were very impressive too.  There is one machine that cuts brass discs out of a sheet of brass, and then bangs them into a cup shape.  Then there are two rows of machines joined together, each row of machines is about 100 metres in length.  Essentially at one end the brass cups are poured in, then they are hammered, cleaned, hammered, cleaned and so on until at the end the last machine shoots out completed cartridge cases!  I noticed that most of the machines were made by Manurhin.

SM also makes pistol ammunition for the Swiss Army, the Pistolen Patrone 41, that was originally used in the SIG P210 (A49) pistol and currently the SIG-Sauer P220 (A75) pistol: 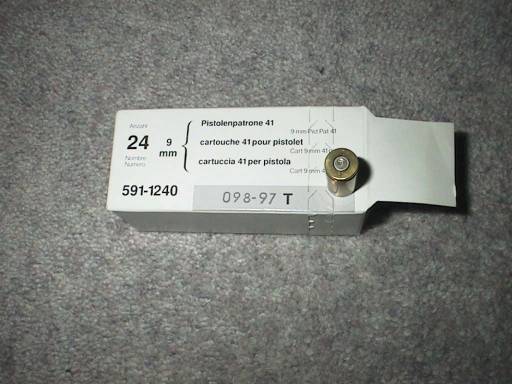 This is sold commercially at pistol ranges in Switzerland.  It is very accurate but also very hot, so it is not that suitable for target shooting.  Like the rifle ammunition, it used to be made with a nickel alloy jacket, but now it is copper jacketed.  It is fairly standard 124gr. FMJ, nothing to get excited about really.  Headstamps are the same as for the GP90 rifle round.  It comes in 24-round boxes, which is quite unusual, enough for three magazines worth.

Each member of the Swiss Army is issued a Stgw 90 to keep at home together with a single box of GP90 ammunition that is kept in a sealed can similar to a can of corned beef.

And onto the museum!  Unfortunately some of the best photos I took seem to have disappeared out of my camera, as they had two Stgw 90 PEs (the semi-auto version sold in gun shops) set up in the corner of the museum that I took pictures of with a novel CO2 conversion kit for indoor practice (made by a company called Waffen Furter in Olten).  More noteworthy than that were the serial numbers on the rifles: #000001 and #000002!

Given that there are a fair few photos I’ve decided to do hyperlinks to them:

A selection of .22 rimfire ammunition made by SM in the past together with a SIG P210 fitted with a .22 conversion kit.

A prototype SIG SG541 assault rifle in 6.45mm NSK, the round nearly adopted instead of 5.56mm.

Not a very good picture of some Swiss service pistols.  Note the sardine can of 9mm ammunition issued to Swiss Army officers.

Boxes of various types of 5.6 ammunition, including tracer and drill.  Note the ammo can for GP90 ammunition, rarely seen.  These are all pre-production samples.

Anti-tank munitions and shaped charges made by SM.  One of SM’s specialties is making shaped charges, they hold several patents on the method of production.

Another main product for SM are hand grenades, the British Army having entered into a large contract to buy them.

Shots of various Swiss Ordnance Lugers, the Swiss were the first to adopt the Luger in 1900.  I think this is a pretty good selection of them, the Swiss using three or four distinct types up until the adoption of the SIG P210 in 1949.  Here’s another shot.

Plates showing penetration of the GP90 round (I think, not sure).  The top one is obviously a bit harder steel but it’s pretty serious thickness.  Note the sardine can of GP90 ammunition on the right, this is found in many Swiss homes!  The box below with the red “B” is blank ammunition.

A prototype Stgw 90, you can just about make out the different method of holding the stock closed as compared with the production model.  On the prototype the stock was locked in the closed position by clipping onto the end of the front receiver pivot pin.  If you look at the boxes of ammunition in the case, you will see the one at the front right has a diagonal stripe on it, this is tracer ammunition.

A picture of some pretty rare SMGs, including some prototypes.  The Swiss were never too keen on SMGs because it runs contrary to their philosophy of the individual marksman.  I think they were relieved when the Nazis invented the assault rifle!  Unfortunately I took a picture of an extremely rare FN FAL made in 7.5x55mm Swiss with an odd curved magazine but it didn’t come out.

My great thanks to M. Frutiger and the staff of SM for their hospitality during the visit!