Perhaps no other small arm has been as vilified as the SA80 (Small Arm for the 80s), the standard issue rifle (and machinegun) to the British armed forces.  Given that British shooters also get vilified on a fairly regular basis I could think of no better choice for our inaugural review!

The gun featured in this review is a late production L98A1, better known as the Cadet General Purpose Rifle, which is essentially a straight-pull bolt-action version of the SA80.  This one has been fitted with a flash hider and SUSAT (Sight Unit Small Arms Trilux), however the standard L98A1 is fitted with iron sights and has no flash hider.  The SUSAT is the standard sight fitted on SA80s issued to infantry units in the Army.

The L98A1 is one of three versions of the SA80 adopted by the British Army, for use by Army Cadet Forces.  To avoid needless red tape the gun was designed specifically to be a Section 1 firearm, although this no longer matters as a provision of the Armed Forces Act 1996 allows cadets to use prohibited weapons.

One thing I would like to point out before going any further is that a lot of the criticism of the SA80 that you will read has been written by people who have never even touched an SA80, let alone fired one.  There are genuine flaws with the SA80, but many of them have been exaggerated or are confined to early production guns (e.g. the one about being able to squeeze in the sides of the receiver and stop the bolt moving).  To cut a long story short, the SA80 is not as awful as some people make it out to be, though it does have shortcomings.

First, I did like the cocking system on the L98A1. 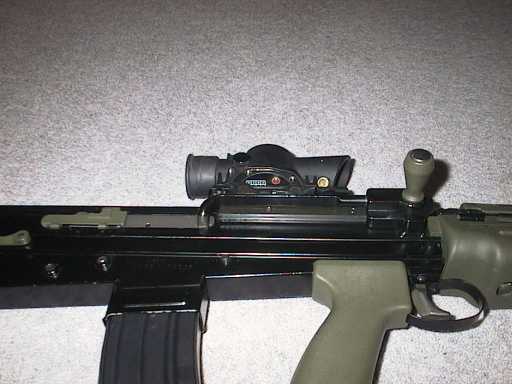 This is by far the fastest straight-pull rifle I have ever used, far quicker than the slew of straight-pull AR-15s, Mini-14s etc. that have appeared since the 1989 ban on semi-autos.  Rapid aimed fire with this rifle is only slightly slower than a semi-auto, although obviously you can do “spray and pray” much faster with a semi-auto.  The only really major flaw as you can see from the photo is that the cocking handle bar partially obscures the ejection port when you pull back the cocking handle, however, this appeared to be the cause of only one malfunction during testing.

Operation is very simple, simply pull back the handle all the way and release, the springs are still in there so the bolt goes forward automatically.  I did find that if you ride the handle forward the sear sometimes failed to re-engage, so don’t ride the handle!

The SA80 has a reputation for accuracy, this is due largely to the heavy barrel that is nearly free-floating on the L98A1 (but for the fore-end screw), plus the SUSAT x4 optical sight, a higher magnification than any other military rifle I am aware of.  I did find the SA80 to be accurate, although not as accurate as I had hoped due largely to the trigger pull, which is rough.

This is due to the long trigger bar, which is endemic to bullpup rifles. 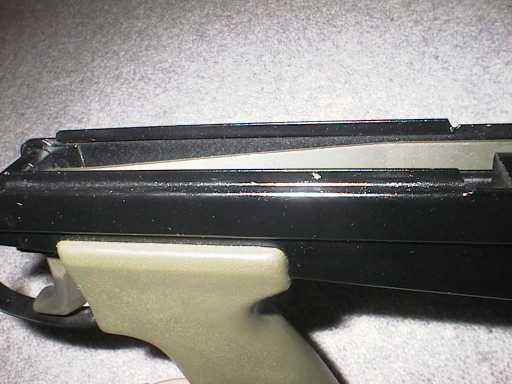 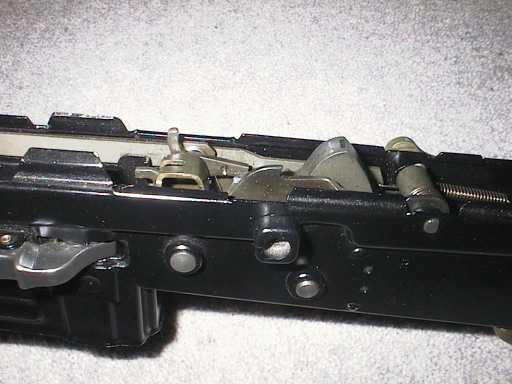 The above pictures show how long the trigger bar is.  Having said that, the SA80 has a better trigger pull than any other bullpup rifle I have tried, including the Steyr AUG and the FA MAS (hmm, with the possible exception of the later G2 model).  If it weren’t for the stiff trigger pull, I feel my accuracy testing would have turned in some really superb groups.  Endlessly in a ten-shot group I would get five or six shots into two inches or less with several flyers, opening the groups up to about four inches (at 100m, using ammo loaded with Sierra Matchking 69gr HPBTs).  The other problem with extracting accuracy from the SA80 is the shape of the trigger. 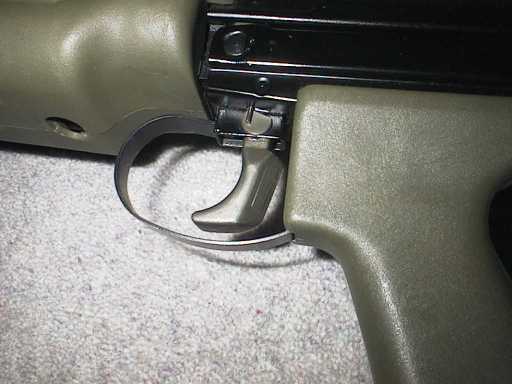 The trigger has been redesigned twice, and my personal view is that the second trigger design was superior to the third one shown.  The current trigger is too wide and places your finger too high to gain proper trigger control.  From the picture you can also see the push button cross-bolt safety just at the top of the picture.  This has been made considerably stiffer to operate compared to early SA80s, to prevent being accidentally knocked into the “on” position (the problem the Australian Army is currently having with their AUGs).

Another redesign is the magazine catch. 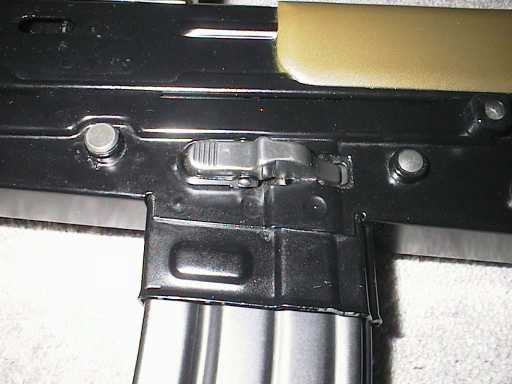 Early magazine releases were prone to being depressed accidentally when rubbing up against a soldier’s clothing or webbing, causing the magazine to drop out accidentally.  Royal Ordnance solved this by putting in a much stronger spring and recessing the front of the magazine button, as shown in the picture.  It works, but I have to say I preferred the older catch for target shooting, it was much easier to operate.

Another redesign is the fore-end. 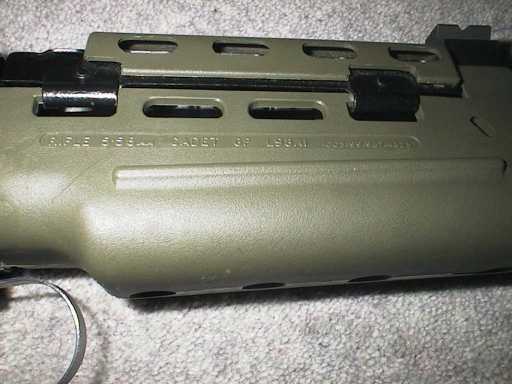 The plastic cover on top had a habit of popping open on its own, this rifle still has the old fore-end, but current issue SA80s have a new cover opening which is extremely difficult to open, even when you want to!  On the L98A1 there is seldom any need to do so as there is no gas system, thus there is no need to open the cover.

One thing that needs changing is the design of the magazine floorplate. 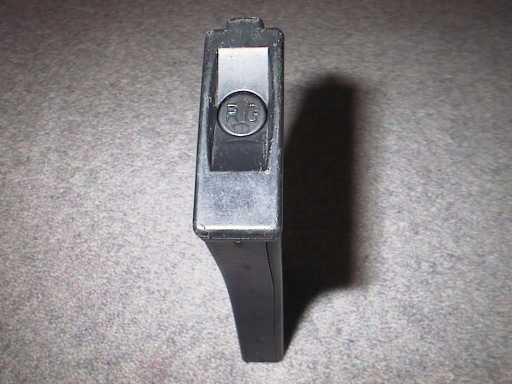 The magazine uses a push-button design to allow for easy removal of the floorplate, however, it has a tendency to slide off on its own!  A more secure method of fixture is needed.  In testing I found a wide variety of magazines intended for the M16 would work with the SA80, including Colt’s, Adventure Line, Kay’s and so on.  The Ram-Line and Thermold magazines would not work because they have ridges on the side that prevent them from fitting into the deeper magazine well of the SA80.  I didn’t have any malfunctions during testing that could be attributed to the magazine.

In examining the SA80 in detail, one is struck by the “Meccano” set style of manufacture, the bolt carrier for example looks like it was machined by a Mongolian desert tribesman using a pocket file, but despite the looks it does work properly.  The one exception is the barrel, which can’t have been made by Royal Ordnance, the quality is too good.  Rumour has it these were sourced from H&K in Oberndorf, which is mildly amusing because H&K has recently won a £92.5 million contract to refurbish 200,000 SA80s (out of about 380,000), including replacement of the barrel!

The SA80 also has a rather good sight on it, the SUSAT. 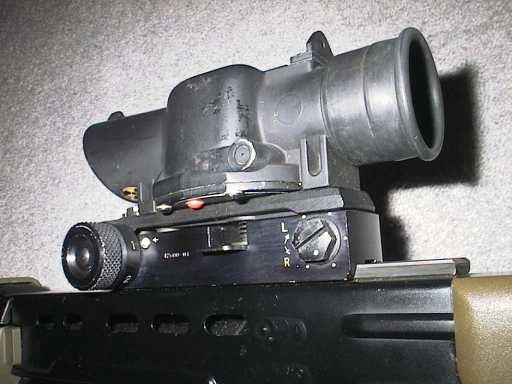 This one has the newer scope mount, with a drum on the left that can be used to raise the SUSAT for longer range shooting.  I’ve only tried it at 100m so I can’t comment on whether it works or not, but exercising the drum loosened something up as the whole thing started to wobble – tightening all the screws improved matters, but it really shouldn’t wobble as much as it does.  One thing I will say is that whomever designed the elevation adjustment is a total idiot, you can see the nut just under the front of the scope.  The only way I could adjust it was using a set of needle-nose pliers!  (There is a tool specifically for this purpose – nice if you have one, I didn’t).  The SUSAT does have a tritium element in it that illuminates the sight post in weak light, unfortunately it was dead on this one.  The SUSAT can be adjusted fore and aft on the scope rail, however I found I had to put it all the way forward.  Even then it has a tendency to whack your forehead during recoil, however it doesn’t hurt because of the thick rubber cup.  The x4 magnification makes shooting at targets 100m easy though.  If you don’t want a SUSAT there are always the iron sights. 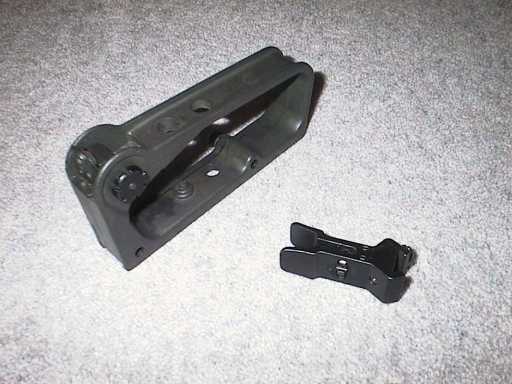 I didn’t think these sights were as bad as I’ve heard, the main problem is the very short sight radius.  However, it does have an adjustable aperture size that is a novelty on a rifle like this (only H&K and SIG have something similar, and it’s more bulky, although the FA MAS has adjustable apertures which are more complex to use).  Elevation must be accomplished on the front sight, which is a pain.

The last picture is a picture of the ejection port cover. 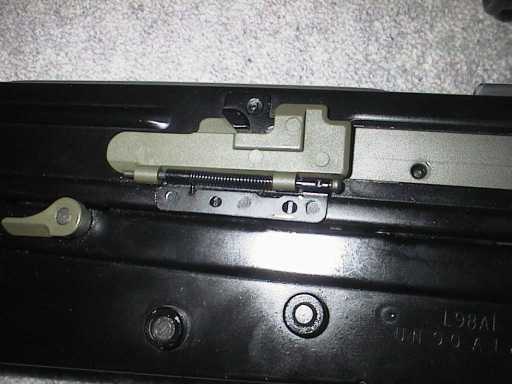 This has a reputation for breaking off, although it seems reasonably sturdy to me.  I didn’t have any problems with it.

My main complaint about the SA80 is the weight of the piece (although it looks plastic there is a lot of steel in this gun), and the balance.  It weighs in at about five kilos, which is heavier than the old L1A1 SLR!  That aside, the weight is to the rear, which makes muzzle control more difficult, despite the heavy barrel.  From prone the way around this is to rest the magazine on the ground.

One thing I will say is that this is the easiest rifle to clean I have ever come across.  It uses rotary locking, so virtually no dirt ingresses the action of the gun, and the bore is chrome-lined, so a bit of bore solvent and a few wipes through and it’s done!  However, dirt can accumulate in the gun through all the holes in the receiver, not a problem if you’re a target shooter as you’re not likely to expose it to that much dirt, a nightmare for military use though.

My general impression of the SA80 is that it was obviously designed at least in part by target shooters, which is why it is such a dire military rifle, as it makes too many concessions to paper punching and not enough focus went on practicality.  However, being a target shooter I have to say overall I quite like it, and it obviously is up to the job as plenty of rifle competitions have been won with them (undoubtedly after some tinkering with the trigger pull).  In the field of military rifles, only the SIG SG550 surpasses it as a target shooting piece, in my opinion, unless you include the tuned AR-15s out there that aren’t really military rifles.

You see, it is possible to like the SA80, after a fashion!  If you want one of these guns, good luck, they’re not made anymore and no more will be made.  There are a fair number knocking about out there – the main problem you will have is finding spare parts, and the rifles aren’t cheap either.

“There’s one good thing about the SA80 – it paid off my mortgage.” – comment from former Royal Ordnance employee.