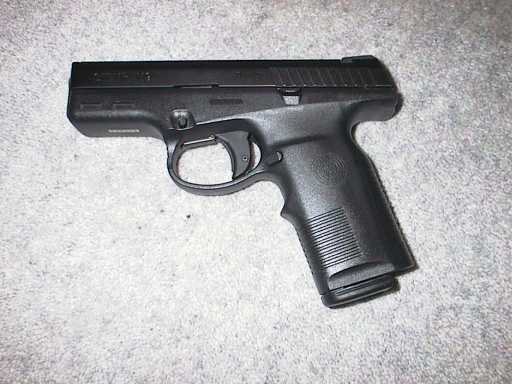 Yet another in our series of reviews of polymer pistols, this time the Steyr M9, which is quite a new design, having hit the market in 1999.  Since its introduction a slew of variations have also been introduced, including the M40, M357 and also compact models called the S9, S40 and S357.

Having been beaten by Glock for the Austrian military contract, it appears that Steyr-Mannlicher took a considerable amount of time to regroup before designing a new pistol that could take on the Glock.  Prior to the M-series pistols Steyr had enhanced their knowledge of polymers with the TMP machine pistol.  Why on Earth Steyr thought the world needed a new submachinegun in this day and age is a wonder, however, it did contain a large amount of polymer.  Steyr has been a leader in the use of polymers, since the Steyr AUG assault rifle has a large plastic stock that was highly innovative when it was introduced in the mid-1970s.

I first encountered the Steyr M9 at the 1999 SHOT Show, where prototypes were on display.  From handling it I thought it was an okay pistol, but the trigger pull was too light and seeing as one of the main markets is the police, I couldn’t see it doing too well.  At IWA 2000, I handled several more of these pistols and noticed that Steyr had increased the trigger pull weight considerably.  Not content with that, Steyr announced yet another change in the trigger pull weight in mid-2000.  Americans can get the new trigger pull for free, but I’m not sure how it works for European buyers.

This particular gun was made in March 2000, and it feels to me as though it has the harder trigger pull.

The gun comes in a rather natty carry case. 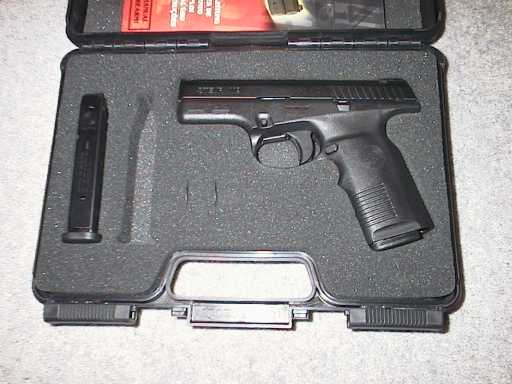 Steyr seems to have gone for the “innovation” route to getting people to buy the M9, and it does contain some unusual features.  However, there is a reason why guns generally contain fairly standard features nowadays, it is because everything has been tried over the course of the past century and what works and what doesn’t work has become fairly settled.  Not withstanding that, Steyr decided to do some things differently. 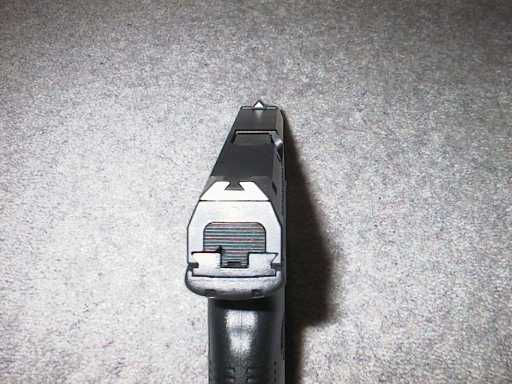 One of the first things you notice are the sights, which consist of a triangular front sight with a rear sight notch cut appropriately for it.  At the 1999 SHOT show, Wayne Novak (who designed the sights on the S&W semi-autos) was standing next to me on the Steyr stand and commented: “Which idiot designed these f—ing sights?”  I don’t think they’re quite that bad, but I have to say I was not that keen on them.  Part of that was my familiarity with more ordinary sights, but I didn’t like having a pointy front sight.  The problem is that it is very difficult to keep the top of the front sight level with the top of the rear sight, essential for precise shooting, because it is difficult to pick up the narrow top edge of front sight.

I have watched someone shooting an S40, the compact .40S&W version of this gun, and they appeared to have great problems lining up the narrow top of the front sight with the rear sight as their shots continually went way high, especially under pressure.

Another widget Steyr have incorporated is a key-operated lock. 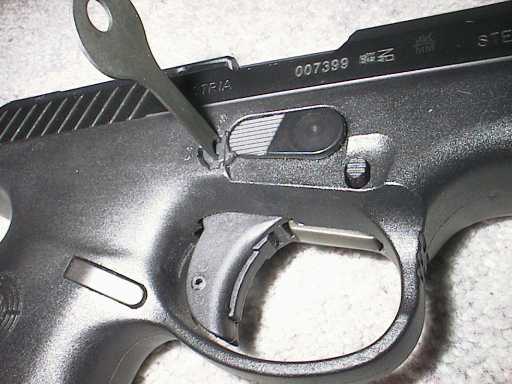 This can only be operated using the supplied key, and it can also only be operated when the gun is cocked.  Why someone would lock up a loaded gun is beyond me, I think this is another novelty feature aimed more at the widget crowd than anything else.  Doubtless it was dreamt up because of American sensibilities, there is an ongoing campaign in the US to require guns to have built-in locks.  The gun does come with two keys in case you lose one.  There is another version of the gun designed to use handcuff keys as well.

Another difference from most other guns is the manual safety, this gun is festooned with safety devices as you may have already surmised, having a safety in the trigger like the Glock but also a manual safety similar to that used in the Vektor CP1 and also the M1 Garand rifle. 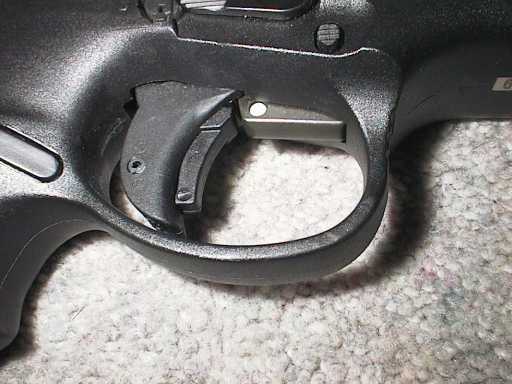 It can only be applied when the gun is cocked, and is put into the “on” position by pulling down the little catches on either side of the gun just above the front of the trigger guard (which is sure to confuse Glock users as that is where the takedown latch is on Glocks).  I found it quite awkward to move the safety up into the “off” position using the trigger finger, although I dare say I could get used to it with practice.

The magazine holds 14 rounds of 9mm, one less than is usual in guns of this type, however it also has a smaller grip too.  The magazine itself bears the warnings required under US law, which will no doubt cause great confusion in other English-speaking countries where they are encountered, because of the comments about “Law Enforcement Use Only” etc. 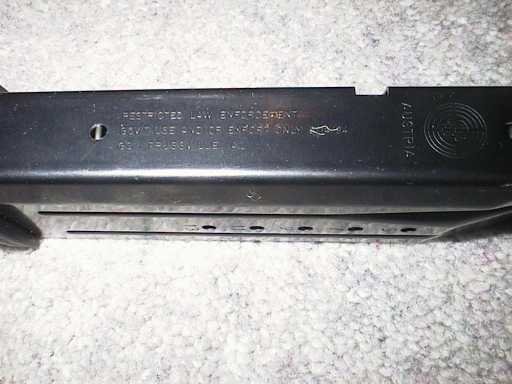 The gun has a proper push button magazine release unlike the dreadful levers on the USP and P99.  However it is a bit low on the grip, so you do have to move your hand slightly for your thumb to reach it, but not a great deal. 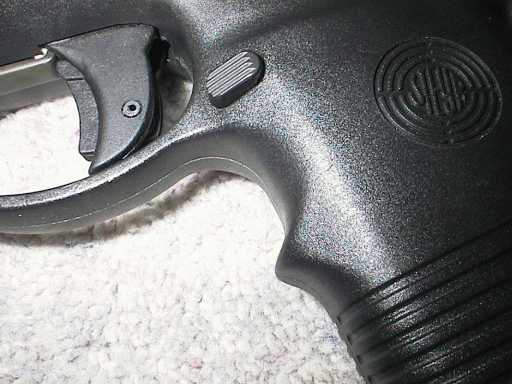 The magazines are made of metal, another plus, less friction when they drop out and it enables the grip to be made with a small circumference.

I’ve shot a Steyr M9 in the States, it is more accurate than a 9mm Glock, though only marginally, I suspect the more precise front sight and the trigger, which requires less movement, contributed to that accuracy.  I had problems with the sights as outlined above, although with deliberation I could get precise hits.  The only real problem I encountered other than the usual problems of lack of familiarity with a new gun was that the loaded chamber indicator appears to cause erratic ejection of spent cases from the gun.  The tip of the indicator (which protrudes from the back of the slide when the chamber is loaded to let you know the gun is loaded) appears to be the cause of the problems, it also appeared to cause the only malfunction I had during the course of firing 100 rounds or so.

All in all an intriguing pistol, although it has probably arrived a bit too late to beat the Glock.  Steyr make a wide variety of accessories for the gun, including the usual holsters, nights and so on.  The most interesting accessory is an attachable buttstock, with a compartment for two spare magazines.

If you want a Steyr M9, unfortunately there is no official importer in the UK, it will be down to you finding grey imports by searching at arms fairs.  Being a very new design there are probably very few in the country at the moment.  You can find more information on the Steyr website.