Years ago, Smith & Wesson finally recognised that Americans were buying lots and lots of 1911 pistols and AR-15 rifles, so they decided to start making their own.  And then in 2009, they had the bright idea of making a dedicated .22 rimfire version – the “Military & Police 15-22”.

Various companies in the past have had a similar idea, the first was probably Armi-Jager back in the 1970s.  However the AP-74 was pretty awful, at least by current standards and S&W being a mainline gun manufacturer has done a better job than most, perhaps any other gun company, in realising the concept.

There isn’t actually much to this rifle as most of it is made from: “polymer”, a.k.a. “plastic” although what kind of plastic it is I’m not sure, but strong enough to form the receiver and handguard of a .22 rifle at any rate.

The barrel, bolt, trigger mechanism, sights and a few other parts are made from metal though.  Although the rifle looks superficially like an AR-15 there are substantial differences, for example the magazine well will not accept regular AR-15 magazines, only magazines designed for this rifle.  S&W themselves make 10-round and 25-round versions although there are apparently aftermarket drums available (e.g. Blackdog).  Why you would want to use a drum when .22 rimfire ammo is so thin on the ground I’m not sure.  Ten-round magazine pictured. 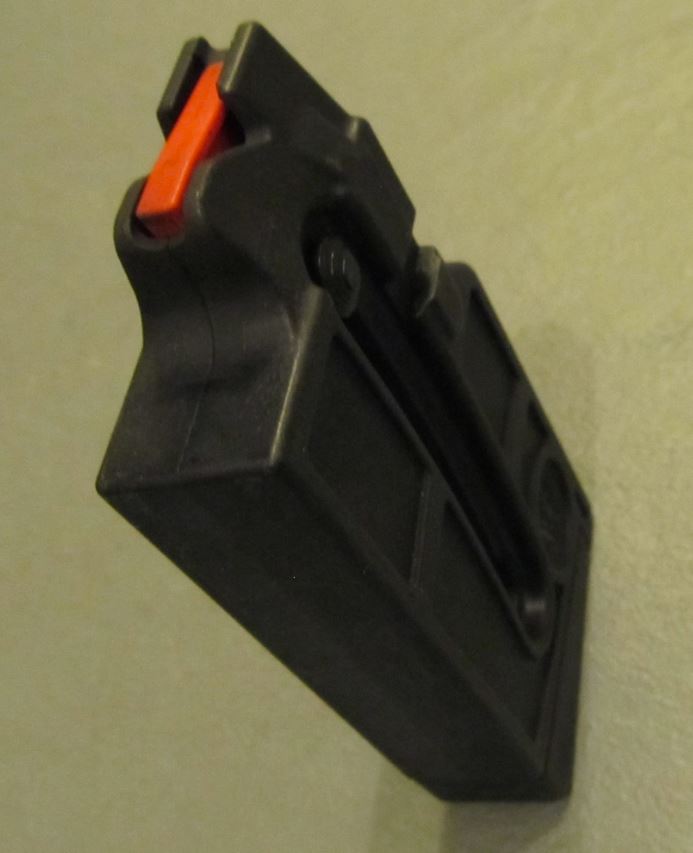 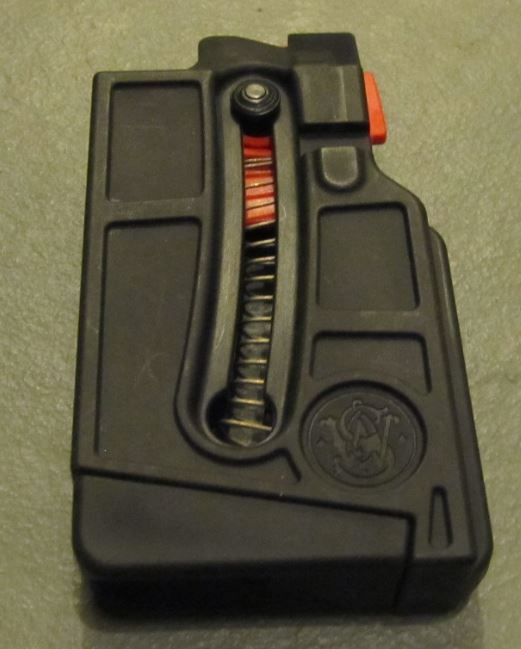 The rifle itself is available in a plethora of different versions as detailed on the Smith & Wesson website, for example in different colours, with different furniture (Mag-Pul), with a flash hider (why?) and perhaps most importantly the Performance Center version which has a match trigger and chamber.  There was a pistol version that was briefly available, but it was ungainly so S&W stopped making it.  The rifle reviewed here is the bog standard version.

The barrel itself is 41 cm long (16 inches) to comply with US law, although it has to be said that is a pretty sensible length for a .22 rimfire rifle barrel.  The barrel is nearly free-floating except for a piece of plastic at the muzzle end of the handguard. 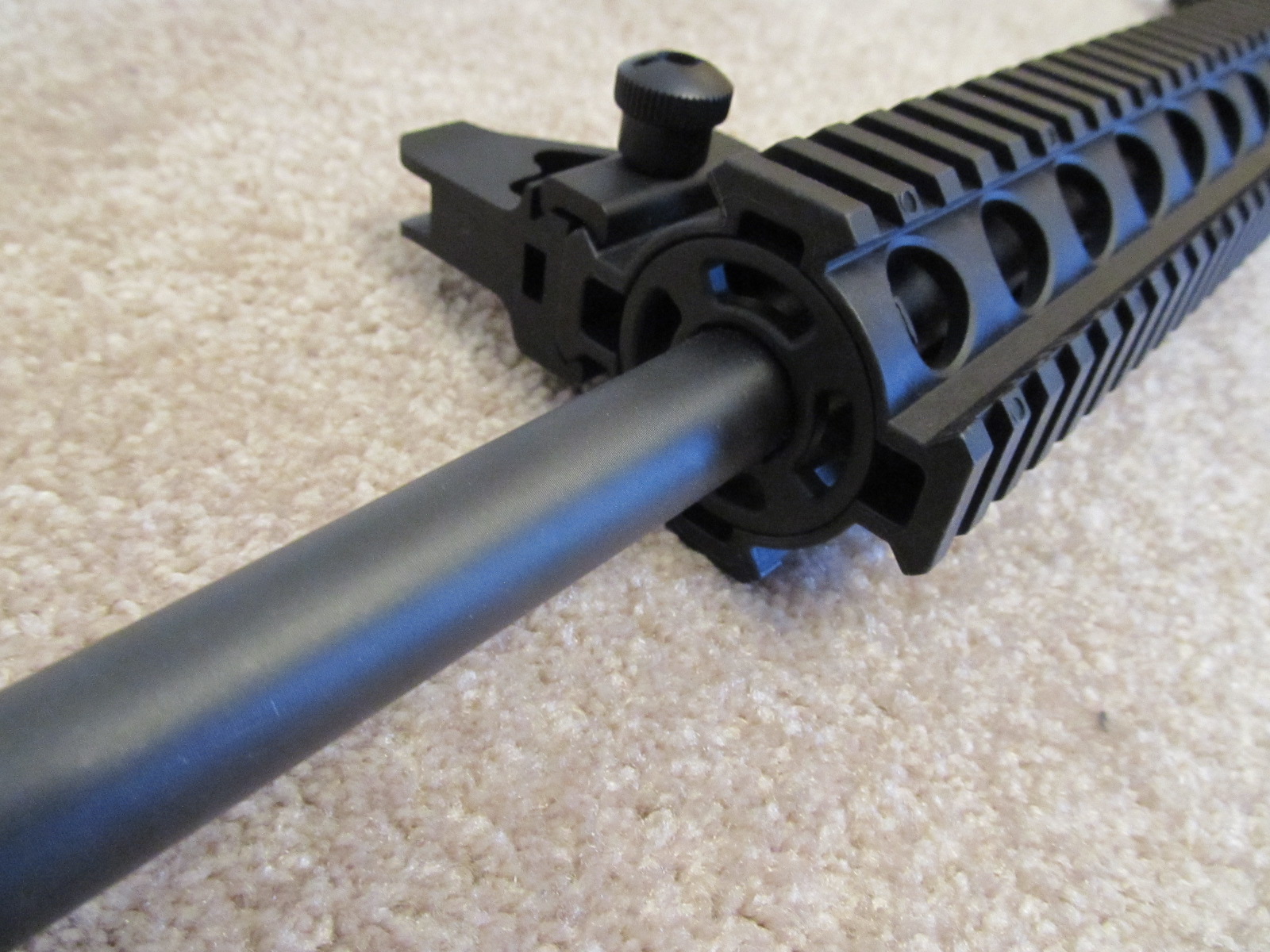 That piece of plastic can actually be removed quite easily but I didn’t bother trying to shoot the rifle without it.  The handguard has MIL-STD 1913 rails molded into it (often erroneously referred to as “Picatinny rails” – Picatinny Arsenal did not invent them, Dick Swan from A.R.M.S. did).

Coupled with the rail on top of the receiver, these allow a wide variety of accessories to be mounted and I used a forward grip throughout testing to see if anything bent or broke off – no it didn’t, and I couldn’t seem to change the point of impact with a strong grip either, which was interesting.  Clearly it does not flex easily.

The receiver extension on the M&P 15-22 is a plastic extrusion rather than a screw-on tube as with an AR-15, bear this in mind if you’re thinking of putting a different type of stock on one. 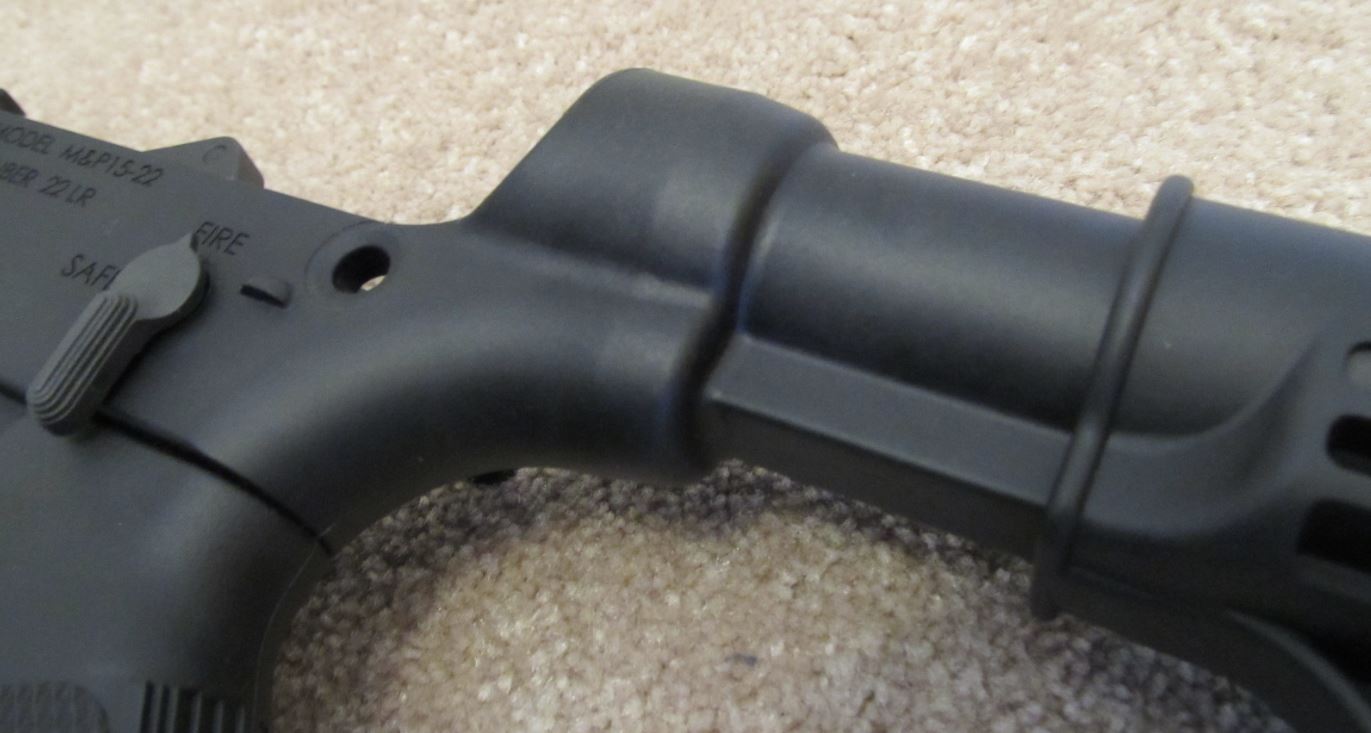 This does limit your stock options.  The trigger mechanism though is standard AR-15, which means you can use trigger mechanism components designed for an AR-15.  However bear in mind this is not an AR-15 and because the firing pin is spring-loaded, you might have issues using lighter trigger springs and hammers.  The standard trigger pull was pretty heavy but broke cleanly and was consistent.

On the original rifles, S&W identified a defect which caused the rifle to fire out of battery or double, they fixed this with a heavier recoil spring on the bolt assembly as pictured.

So if your rifle doesn’t have a blue spring, you should get it replaced.  The bolt assembly isn’t designed to be stripped any further so it’s basically a warranty issue.

As you can see from the pictures it is a pretty straightforward design, the captive bolt assembly means that field-stripping the rifle is very similar to an AR-15. 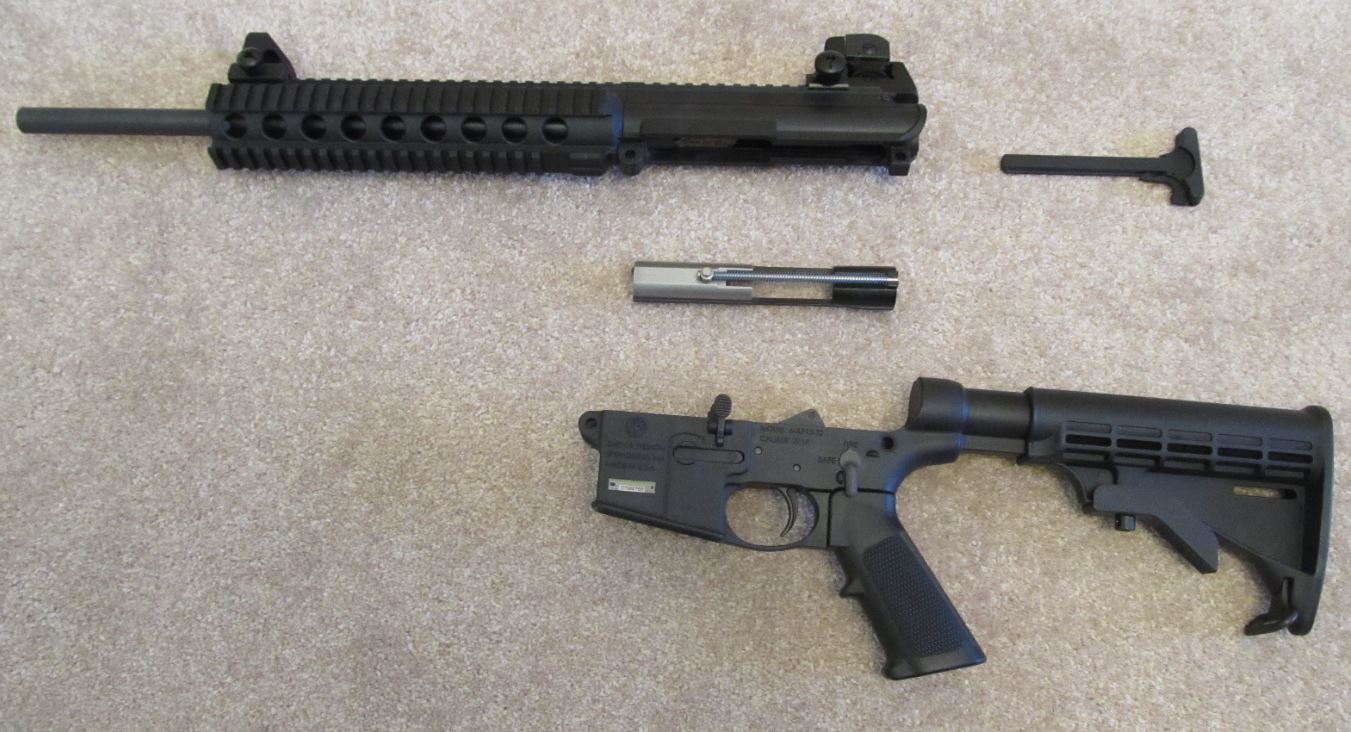 And being a .22 and largely made of plastic, very simple to clean.

The iron sights are removable, I’ve seen them used on AR-15s as well, the rear sight is really for a carbine as it has the “6/3” drum on it and I think we can safely say you won’t be shooting a .22 out to 600 yards!

There is also a case deflector. 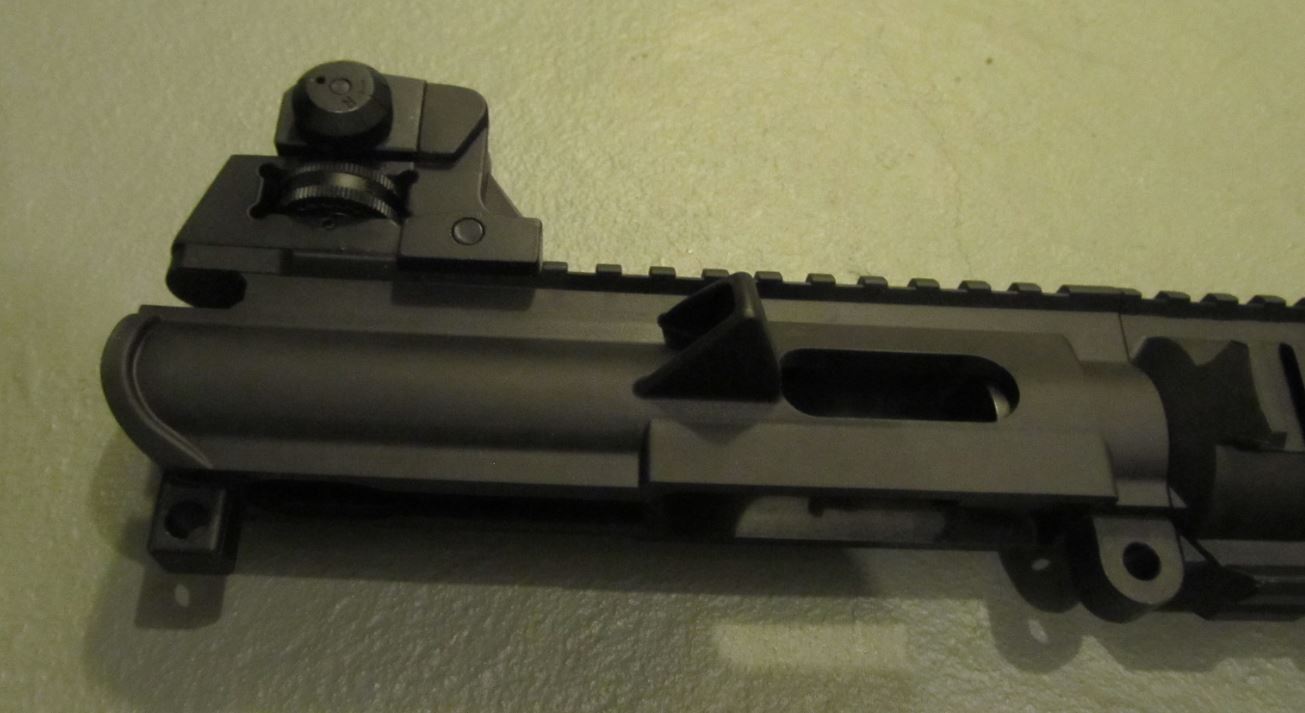 So how did it shoot?  Well, clearly high velocity loads are called for so I tried three, Federal 510 (40 grain, high velocity), Federal 710 (same as 510 but the bullet is copper-washed) and some Aguila “SuperExtra” which is also a 40 grain, high velocity copper-washed load.  The stated muzzle velocity for these loads is 1,240 feet/second for the Federal loads and 1,255 f/s for the Aguila.  The Aguila ammunition box had some writing on it that said it had been made using “Eley technology” so I assume they bought the tooling off Eley.

There was no particular difference between the performance of the Federal loads other than that 510 left a bit more fouling in the gun.  In terms of performance though they were perfectly adequate, the Aguila load however despite having a listed MV of only 15 f/s more had a noticeably higher point of impact on the target and a louder report as well.  Here is a typical 10-shot group fired from a casual bench-rested position at 25m. 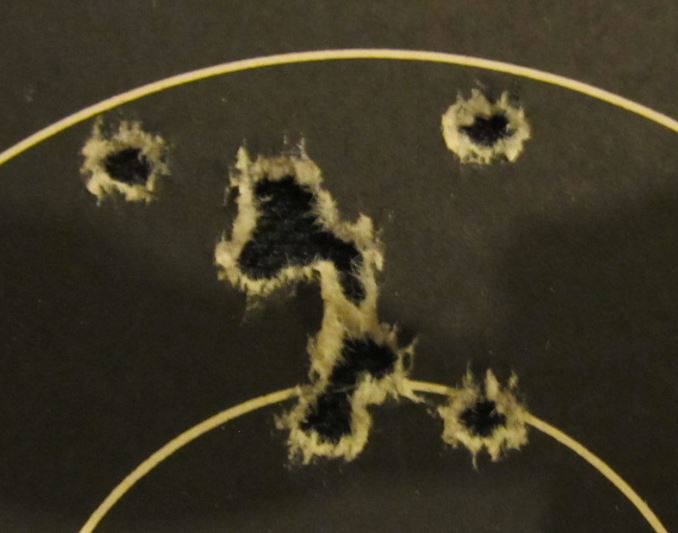 To me, that seems pretty good for inexpensive ammunition from an inexpensive rifle, especially given the military-style sights and heavy trigger.  The Federal ammunition appeared to put up slightly worse groups, but that could have just been me.  Anyway, I shot several ten-shot groups with the Aguila that were 2.8cm across, which isn’t exceptional as it is over 4 MOA.  But for anything you’re likely to use a rifle like this for, it’s more than adequate.

The real trick with all .22s is the answer to the question – “how reliable was it”?  We’ve all had .22s jam in annoying ways I’m sure.  Well the answer is very reliable, but there was one snag – with all three types of ammunition the rifle failed to fire once out of every fifty shots, so 2%.  As it happened with all of the ammo this was clearly a rifle problem.  All of the rounds that failed to go bang went off on a second attempt.

In my experience it’s not unusual for inexpensive rifles to have failures to fire because getting the firing pin right on a rimfire is a bit of an art.  This is one of the reasons why proper target rifles cost a lot more money (and even then they’re usually tuned for certain types of ammunition).

So in summary this seems to be a good choice for anything you might want to use a .22 rimfire rifle for, with the possible exception of serious target shooting, e.g. IPSC mini-rifle.  For that, you’ll need to experiment with ammunition to find something that the rifle always fires with, or alternatively you’ll need the firing pin tuned up, possibly the trigger mechanism fiddled with as well (I suspect the Performance Center version might be the answer).  Or maybe I just got a rifle with a problem firing pin!

A particularly good choice for pest control I think as exposure to the elements won’t be a problem.  Also very lightweight at around 2.25 Kg.

Anyway, in the U.S. the MSRP on these things is $499.  I’ll let you dwell on that and then consider the fact they go for £700 or more in the U.K!  This is as a result of low volumes, shipping, export licensing and proof testing.  And of course, VAT.  Ho hum.