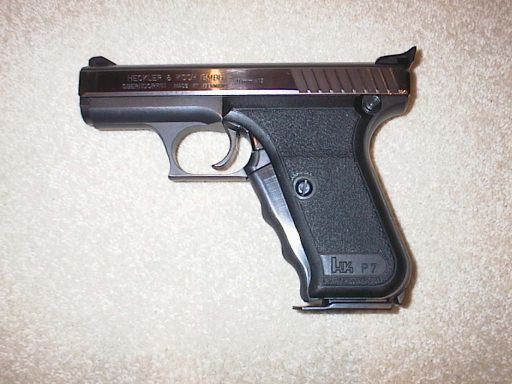 [This review was originally published on the Deactivated Guns Collector’s Association website in February 2002 – Ed.]

To my mind, the H&K P7 is to pistols what the Thompson is to sub-machineguns, i.e. a whacking great chunk of ordnance steel, machined into a very high quality firearm.  Although it is not the world’s most popular pistol, the P7 is quite likely the most innovative pistol design marketed since World War 2, incorporating a heap of features that although not entirely original, have never before been successfully incorporated into large-scale manufacture.

So where do I start this review?  Probably best is to tell you where the impetus for the P7 came from.  Like the SIG-Sauer P225, the P7 was designed in the mid-1970s to compete for German police contracts, the German police realising after the disaster of the Munich Olympics that they needed to start taking their guns a bit more seriously.

The German police specifications called for a compact 9mm pistol, which was quite a novel idea for the time, and the manufacturers competing for the contracts had difficulty coming up with something short enough that would work reliably.  However, there is nothing a German engineer likes more than a challenge!  H&K solved the problem by using a method of operation known as gas-retarded blowback, as far as I know the first pistol to successfully use it.  In terms of operation, in front of the chamber is a small hole.  Upon firing, expanding propellant gases flow into this hole under pressure, and bear against a piston that rides under the barrel and is attached to the slide.  This pressure prevents the slide from opening violently, a problem with straight blowback 9mm pistols, especially compact ones.  By the time the pressure dissipates, it is safe for the slide to open, and the ordinary functions of ejecting the cartridge case and feeding a new round into the chamber take place.  This is the gas piston: 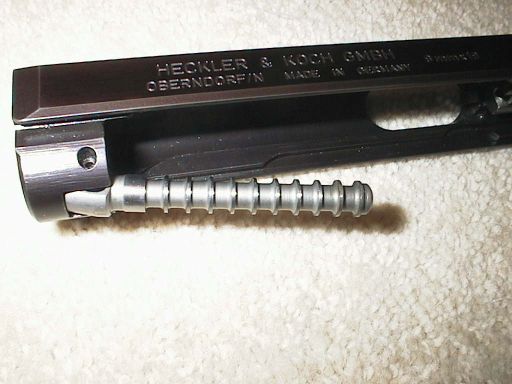 It’s a clever idea, and it works well, however it does suffer from two flaws: the first is that you have to use jacketed bullets, otherwise bits of the bullet can be shaved off and lodge in the gas port.  The second problem is that P7s do tend to have more felt recoil than 9mm pistols that use the vastly more common Browning-type method of delayed blowback.  There is one very major advantage though; the barrel on the pistol is fixed and does not move, which translates into a very accurate pistol: 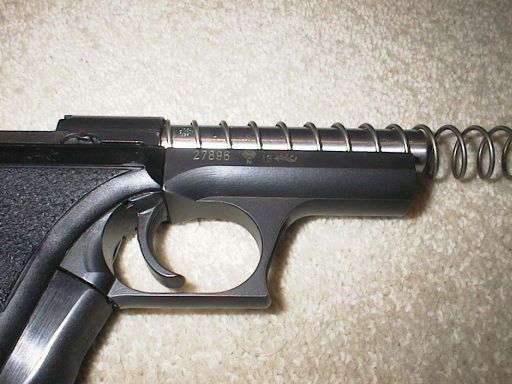 The barrel uses polygonal rifling, instead of the more conventional lands and grooves.  This provides a better gas seal around the bullet as it travels down the barrel, an important feature of the P7 because the seal is needed in order for the gas retardation to work properly.

These are two of the innovative features on the gun, and the other main feature is the reason it has become a modern classic.  This is the method of cocking the gun.  Although striker-fired guns are very common, such as the Glock, the P7 uses an original method of cocking the striker, a big lever that forms the frontstrap of the grip: 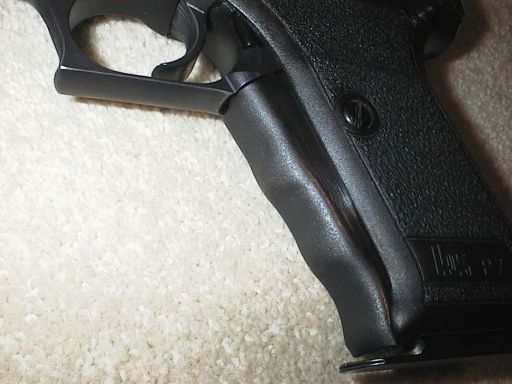 The P7 has become known as the “squeeze-cocker”, because simply put you squeeze the lever back, and provided there is a round in the chamber, the gun is cocked and ready to fire.  It takes some getting used to, but it is novel and it does work better than you might think.  However, I suspect it is one of the reasons the gun has never been as popular as some of it’s contemporaries; it’s just too different.  The other reason is the price – like a BMW, P7s don’t come cheap!

For those of you who must know how it works, here goes: 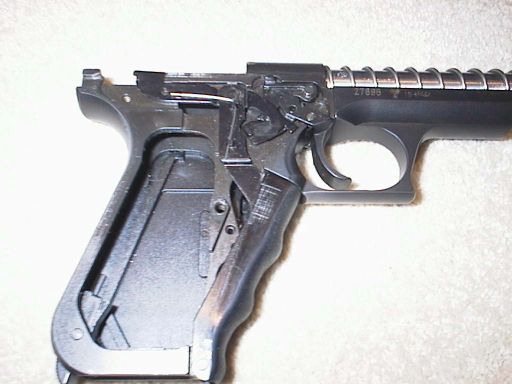 The major advantage of this system, at least according to H&K, is that if the gun is dropped, the gun instantly decocks, so there is no risk of accidental discharge.  The other advantage is that it eliminates the need for a double-action first shot (a feature of the P5 and P6), which often is a missed shot, due to the heavier trigger pull. 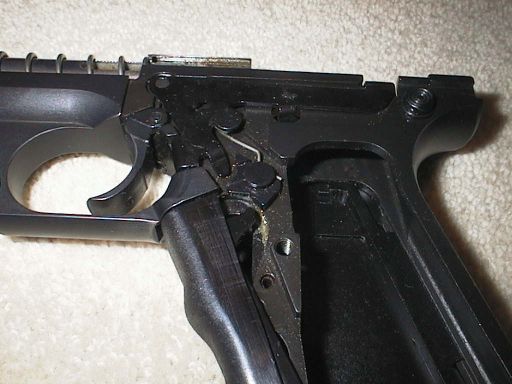 Looking at the gun from the other side, you can see the slide hold-open that pivots upwards when the magazine is empty, or when the difficult to operate tab behind the trigger is pushed inwards.

Originally known as the PSP (for Police Self-loading Pistol), the name P7 came about because it was the third pistol recommended for adoption after the German Federal Police tests.  (The others being the Walther P5 and the SIG-Sauer P6).  Very few P7s are stamped “PSP”, somewhere around 250, and if you have one of these it is definitely a collector’s item.  Production started in 1976, and ceased in 1998 – production kept going that long to provide German police with spare pistols for ones that had worn out or broken.  Unfortunately for H&K, only three German State police forces adopted the P7, and one of those uses the Walther P5 also.

The most prolific and thus most commonly encountered version encountered is the standard P7, pictured at the top of the page and the other side is shown here: 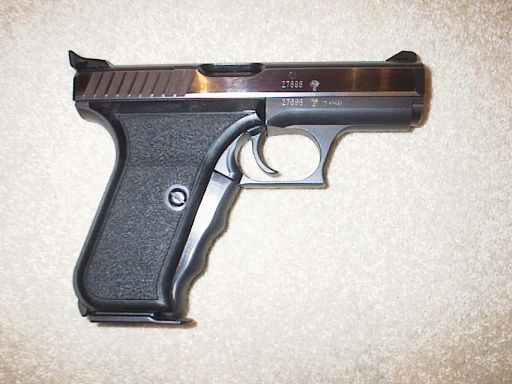 This particular gun has been fitted with high-profile Millett sights.  A distinctive feature of the standard P7 is the heel-of-the-butt magazine release catch: 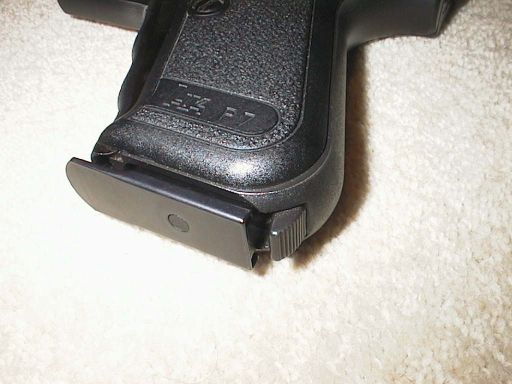 This is the best such release I have encountered, although nothing beats a thumb-operated push-button release, in my opinion.

Although the P7 was innovative, it wasn’t overwhelmingly successful, production only reached the mid tens of thousands, which is peanuts compared to the SIG-Sauer P225 (P6).  In an effort to make it more appealing, particularly in the US, H&K modified the design into the P7M8, a similar gun but with a thumb level lever-type magazine release among other modifications.  This gun was introduced in 1983 and did sell reasonably well to US police, being adopted by the New Jersey State Police as well as Detroit SWAT, but the fall of the dollar in the mid-80s made them too expensive and once again the P7M8 did not do as well as expected, although it is the only model of the P7 still manufactured and imported into the US (basically for sale to civilians as the P7 has reached cult-classic status there).

The P7M13 was introduced the following year, in 1984, the one pictured is the SD model that has an extended barrel, threaded for a suppressor: 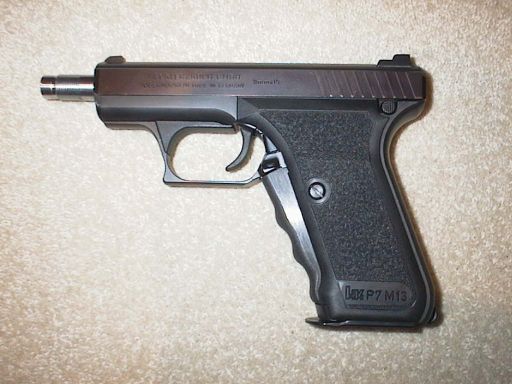 Once again, the idea was to compete in the US police market as high-capacity 9mm pistols were very in vogue in the mid-80s, but the high price and somewhat uncomfortable grip of the bigger gun put off purchasers.  It is still made and sold in the European market, but total production is less than 30,000 guns, once again peanuts compared to the competition like the Glock 17 and Beretta 92FS.

Here is a comparison of the grip size between the P7 and P7M13: 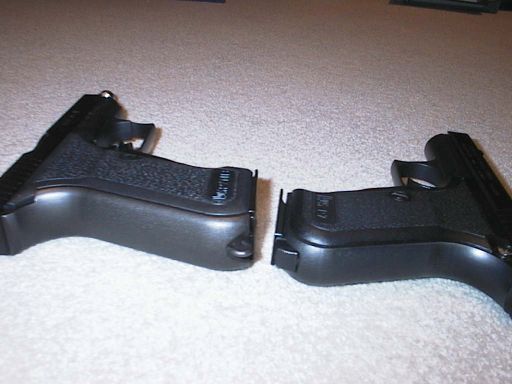 “M13” by the way indicates the magazine capacity of the gun, 13 rounds.  The gun also has a unique magazine, as many guns use an adaptation of the Beretta 92 magazine, but not the P7M13: 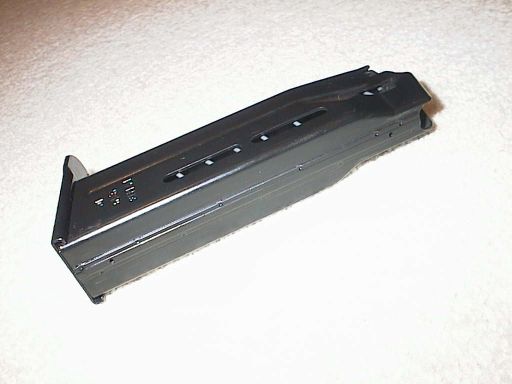 Among the improvements over the P7 was the magazine release, and the trigger guard: 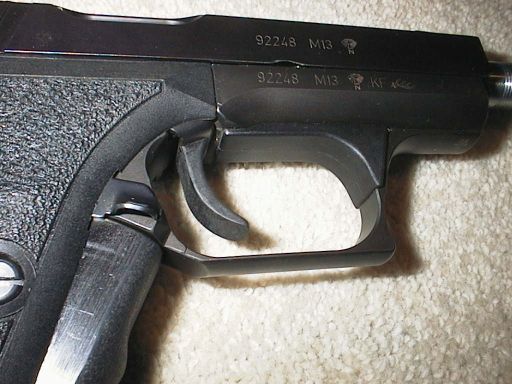 The big piece of plastic in the top of the trigger guard was put there because the gas flowing into the gas port under pressure created a considerable amount of heat, and the plastic acts as protection against burns!  Note the proof mark and date stamp (KF) in this picture, this indicates the gun was manufactured (or proved at any rate) in 1995.

Here is a closeup of the SD barrel threads: 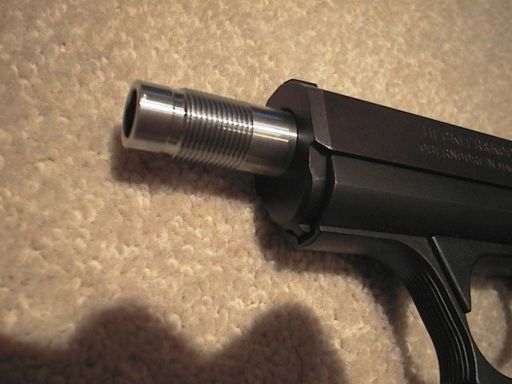 I’ve never actually seen the suppressor H&K intends for use with these guns, I’m told that it is made in Norway.

Here is a picture of the gun with the slide open: 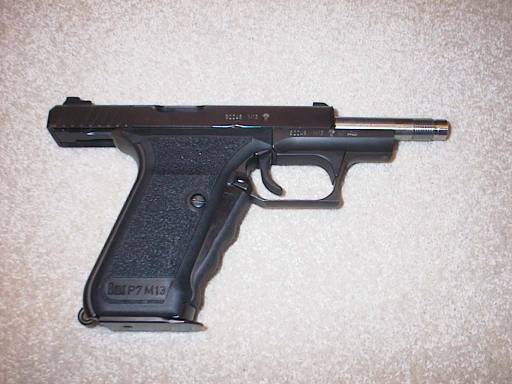 There have been several other models of the P7, all of them much less common than the P7, P7M8 and P7M13.  There is a training version of the P7 called the P7PT8, which is essentially the P7 modified to use Geco plastic training ammunition, a very rare gun.  There is an SD model of the P7M8 also.  Mexico bought several thousand P7M13s (and are apparently licensed to produce it, although I don’t know if they ever have), the Mexican model has a sliding external safety on the right side of the gun above the trigger guard.  This model is called the P7M13S.

Two of the more common variants that you might run into are the P7K3 and the P7M10.  The P7K3 was introduced in 1985 if I recall correctly, and was intended to replace the old H&K model 4.  It was a novel design, having interchangeable barrels that allowed it to shoot .22LR, .32ACP (7.65 Browning) and .380ACP (9mm Short).  I think the idea was to allow the P7 to be sold in countries where 9mm is banned, such as Brazil, and also to have a .22LR version for training purposes.  It was a massive flop simply because of the very high price of the gun.  It also suffered from bad publicity, because instead of the retarded gas blowback system of the 9mm models, it used an oil-filled buffer to arrest the rearward movement of the slide.  Unfortunately some of the first buffers made were defective, and this gave the gun a bad name for unreliability.

With a good buffer in it, they were excellent guns, and the only .380 I’ve ever come across accurate enough for bullseye shooting!  The gun was marketed in the US as a high-price pocket pistol, however although it was a small gun, several compact 9mm pistols of similar size hit the market not long afterward, so no-one was interested in the P7K3.  Production ceased in 1991.

The other gun in the P7 series is the P7M10, the .40S&W version of the P7.  This gun used the frame of the P7M13, a barrel with a bigger hole through it and an absolutely whopping big slide to tame the high-pressure round.  Although you often meet H&K fans who think it was a great gun, in reality it was a lemon, being simply too massive and heavy.  This was odd, because the prototype guns had a similar sized slide to the P7M13.  Why this happened is open to conjecture, however the story I heard is that the prototype model used a differently sized (presumably smaller) gas port and different gas piston to the M13.  To make the P7M10 with that port and piston required expensive retooling, which H&K were unwilling to do as they had the USP in development at the time.  So they simply piled more ordnance steel into the slide.

H&K finally admitted defeat in 1993, the year the USP was introduced.  This is a more conventional and cheaper design, and consequently has been far more successful.  However, pretty much every H&K pistol user you will ever meet, including me, thinks the P7 was the better gun.

Currently only the P7M8 and P7M13 are still made, but they are very thin on the ground [production ceased completely in 2008 – Ed.].  If you want a P7 for your collection of deactivated guns, in the UK you will usually only encounter the P7 and the P7M13 (why, I don’t know, but those are the ones I see).  I’m sure there are some P7M8s out there also but I’ve never seen one.  The P7K3 and P7M10 are quite rare, and I’ll be surprised if you come across one in this country.  Prices vary, usually you can get quite good bargains on P7s, not sure why, but I’m not complaining! 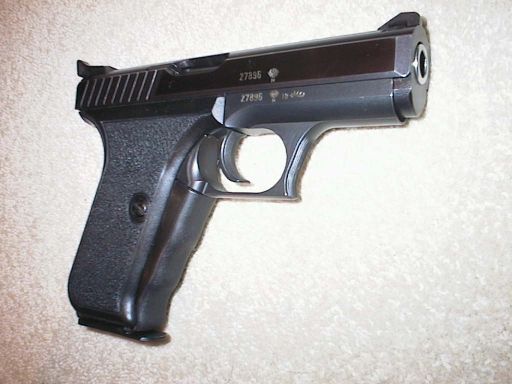