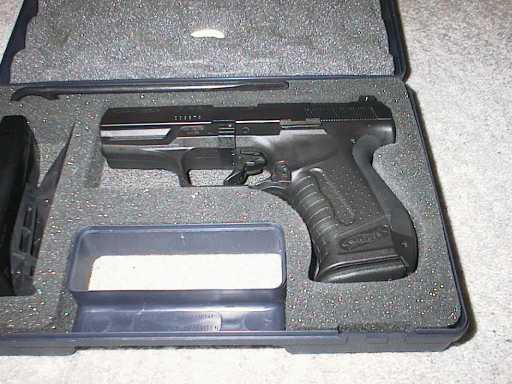 Another in our series of reviews of polymer-framed pistols, the Walther P99 was introduced in 1996, but was hardly noticed until it was used in James Bond films as a replacement for 007’s venerable .32 PPK.  Personally I think he made a mistake as the PPK is in reality a much more practical pistol for undercover use, but hey, it’s the movies!

The P99 has been designed as a “cop” gun, being partially designed by Horst Wesp, a former employee of Glock.  The P99 appears to be designed in part to address some of the criticisms levelled at the Glock by the police, and was aimed in part at the German police market, to replace aging SIG-Sauer P225s, Walther P5s and H&K P7s.  The Interior Ministry released a revised specification for police pistols in the early 1990s, and the P99 was the first gun released to comply with the new criteria (the H&K USP Compact and P2000 being later examples).

Like the H&K USP, it has also been designed to be less expensive to produce than Walther’s earlier innovative but arguably over-engineered designs, which cost a small fortune on the US market (although this was largely the fault of Interarms, the former US importer who charged an arm and a leg for them).  Prior to the P99, Walther made a pistol called the P88 that was part of the US military pistol trials.  This was a superbly-made pistol but it suffered from some serious design flaws.  After discontinuing the P88 in 1993, Walther came out with the more conventional P88 Compact, but although it worked well it was just too expensive for most pockets.  Consequently, Walther was taken over by Umarex and the markets the P99 is aimed at are the police and civilian markets, unlike the military aspirations of the earlier P88.  Unlike H&K’s USP though, Walther decided to be more innovative and it shows.

One of the first things that I noticed when opening the box the pistol came in are the interchangeable grip inserts, a feature unique to service pistols, which enables the grip size to be tailored to different hands.  This is something that has been a long time coming! 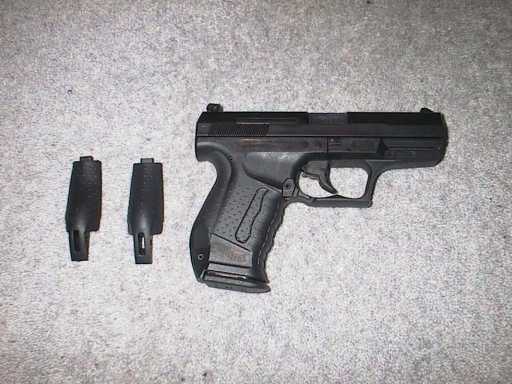 The gun is shown in the picture with the biggest attachment, the two thinner ones are shown to the left of it.  The gun also uses a clever stippling arrangement on the grip that gives a firm hold.

My first impression of dry-firing the gun was that the trigger design was bloody awful!  My finger scraped along the bottom of the trigger guard while working the trigger.  However, at the SHOT show in 1999, I found that Walther had redesigned the trigger and made it more curved and immensely more comfortable and usable.

This P99 is quite an early one, being manufactured in early 1998.

Another innovative feature is the trigger mechanism, which is the only striker-fired mechanism I have seen that offers both a double-action and single-action pull.  The trigger in the below picture is shown in the single-action position. 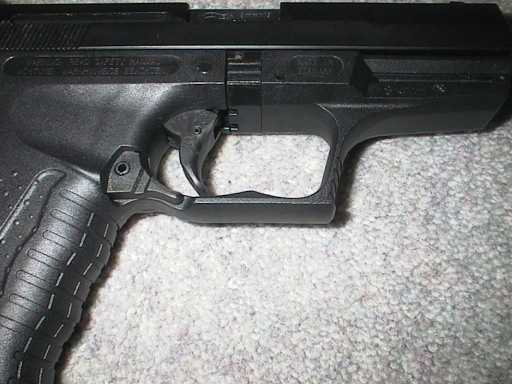 When the pistol is cocked, the rear of the striker protrudes from the slide indicating the cocked state with a red spot on the end of the striker. 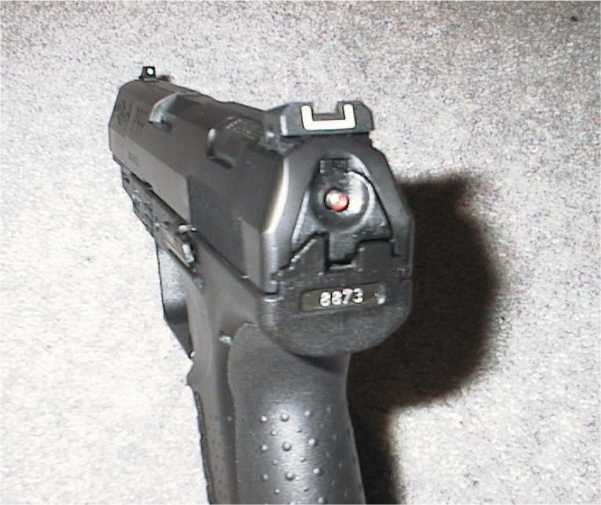 Because the striker protrudes, even in the dark the cocked state can be detected with the shooter’s thumb.  If the shooter wishes to decock the pistol, there is a button on the left-hand side of the slide.  When depressed, it safely releases the striker forward and the trigger moves back into the double-action mode.

Apparently it is possible to alter the trigger mechanism with some minor tinkering so that it always uses the double-action mode, but I haven’t tried that.  Walther makes a double-action only model called the P990.  One important feature of the P99’s trigger mechanism is that it offers a “double-strike” capability like a conventional double-action pistol, this is a major advantage over other guns that use a striker mechanism like the Glock and others.

As you can see from the pictures the gun uses a similar sight setup to the Glock, the main difference is that the rear sight is adjustable for windage with a screw.  Another piece of innovation on the P99 is that it comes with three extra front sights of differing heights so you can adjust the elevation.  I haven’t tried doing that but once again I cannot think of any other service pistol that offers this feature out of the box.  In the US the gun comes with three-dot sights, why the difference I don’t know.

However, one thing I truly detest about this gun is the magazine release, showed in the above pictures.  Like the H&K USP, it consists of a lever that moves downward.  This release however is even worse than the USP, being integrated with the trigger guard and thus making it virtually unusable, certainly not for any sort of target shooting where a rapid magazine change is needed.  Rumour has it this feature was incorporated because German police officers armed with pistols with button releases found themselves accidentally dumping the magazine.  This release appears to be a compromise between a heel-of-the-butt release used by the German police currently and a proper thumb release catch.

The magazine itself holds 16 rounds, one more round than is typical, and is made from metal.  This allows for more creativeness in the grip design (as metal magazines are less bulky than plastic ones), however metal magazines have a way of gradually shearing off plastic magazine catches. 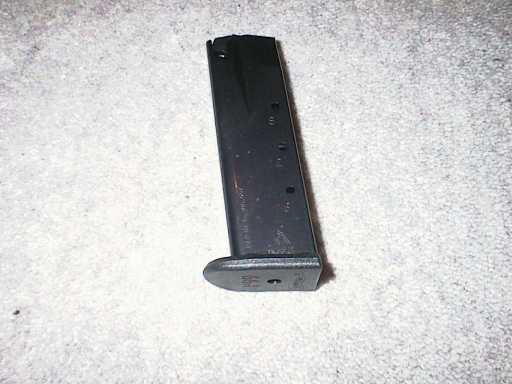 The gun came with a test target that indicates a two and a half inch group at 25m, but heavily split with three shots in an inch and two more shots an inch a half above them.  Not that impressive from a test fixture at the factory.  I’ve fired a live P99, the gun I used was made in mid-2000 and had an even later design of trigger, this one with grooves in it.  As the trigger reach was longer with the newer curved trigger I had to use the “medium” grip insert.  An advantage of that was that the magazine release was a little easier to reach, however, I still had to move my hand excessively to drop the empty magazine.  My impressions of the accuracy of the P99 were confirmed, it’s not that great but it’s not that awful either, it’s what we politely call “service grade” accuracy.  There were no malfunctions, and it is certainly more than adequate for a police service pistol.

If you want a P99, they are out there in reasonable numbers (Nottinghamshire Police apparently use it).  The official importer has recently changed to the National Smallbore Rifle Association and the recommended retail price is £490 plus the deactivation cost your local dealer will charge you for (most of them are however grey imports, not from the NSRA).  There are a number of different variations, including versions in .40S&W, and models commemorating James Bond, Walther, the year 2000 and even a model designed for hunting called the “Le Chasse”.