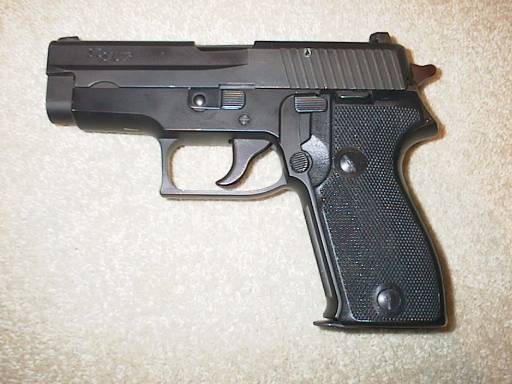 The story of the P225 really began in the late sixties, when the first signs that the Swiss Army might want a new pistol began to emerge.  The problem was that the SIG P210 was simply too expensive to manufacture, and the Swiss Army wanted something cheaper, but still capable of providing excellent performance, as well as having a double-action trigger.  So they turned to the local Swiss company SIG, previous maker of guns for the Swiss Army, for the answer.  SIG entered into a collaboration with the German arms company Sauer to develop a new pistol.

The end result, adopted in 1975, was the 9mm SIG-Sauer P220, known in Swiss Army service as the A75.  It contained many innovative features, the most innovative being the method of locking.  For decades pistols had been designed using the method developed by John Browning for delayed blowback function (necessary with cartridges that produce a substantial degree of pressure upon firing).  This method required cutouts in the hood of the slide, together with locking rings on top of the barrel that fit into the cutouts.  This locked the slide and barrel together, until a swinging link (on the Colt 1911) pivoted the barrel downward, thus providing the delayed blowback operation.

SIG simplified this, using a method that has become extremely popular in the years since, with manufacturers such as Glock adopting it.  Essentially the forward edge of the chamber locks into the ejection port, thereby removing various complex machining operations from the production process.  The picture below shows the barrel locked together with the slide: 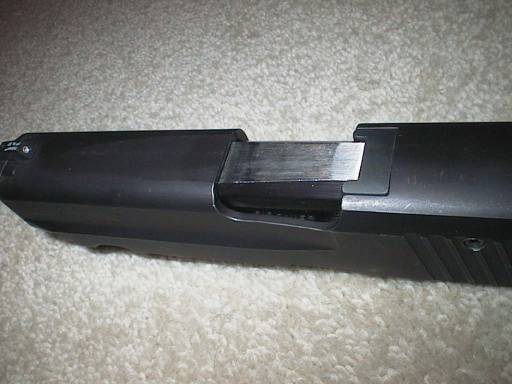 The P220 has many other clever features, such as a decocking lever (not a new idea but rarely employed until the P220 came along), an automatic firing pin safety (once again, not a new idea but SIG perfected it), and also a slide made of sheet steel with the breechblock pinned in.  Similar ideas were tried by the Germans during World War 2 but as far as I know the SIG-Sauer pistols are the first ones to use it in a perfected format.

At the same time development work was being carried out on the P220, SIG was also designing another pistol called the P230.  This pistol, it was hoped, would be ideal as a police pistol, and used the new 9x18mm Police round.  As it turned out, this design was eclipsed by what became the SIG-Sauer P225.

Not long after the P220 was put into production, the German police authorities decided they needed a national standard for police sidearms.  Although the original idea was to have a single pistol for all the police, this was politically impossible due to objections from gun companies and local politicians.  To begin with, the idea was to improve the Walther PP .32 that was then issued.  Walther developed the PP Super in 9x18mm Police, but it was decided this was not a substantial enough change.  Eventually what came out of these discussions was a national specification for police sidearms.  This was a pretty demanding specification for the time.

The gun was required to be in 9mm Parabellum calibre, have safety features that precluded accidental discharge and perhaps most demanding an overall length of 180mm and a maximum height of 130mm.  Although compact 9mm pistols much smaller than this are common today, in the late 70s making a 9mm pistol of this size that could stand up to the testing regime demanded by the specification was difficult.

Three manufacturers, Heckler & Koch, SIG-Sauer and Walther managed to come up with pistols that met the specification: the Walther P5, the SIG-Sauer P225 (known as the P6) and the Heckler & Koch P7.  (Mauser also had a design, but it was never put into full production).

Each German state could purchase whichever pistol it wanted to.  The SIG-Sauer P225, being the least expensive (due largely to the innovative simple design), got the bulk of the orders.  In order to make so many pistols, SIG had already bought a controlling interest in J. P. Sauer & Sohn in Eckenförde, Germany to make components for the P220, and all P225s have been made there also.

You will often see in histories of SIG that SIG bought a controlling interest in Sauer in order to avoid Swiss export laws.  This never made sense to me because German export laws are even tougher.  I finally found someone in Switzerland who claimed to know what had happened, and apparently the partnership was largely because SIG simply needed the production space and development help for the pistols, and having a plant in Germany obviously helped with getting German police contracts and may have helped with any orders from NATO (although no significant orders for SIG-Sauer pistols for military use were placed by any NATO country until the 1990s).

In any event, the P225 was a runaway success as a police pistol, and is the most widely issued sidearm to the police in Europe, with over half a million having been made.  Not only most German states but also Sweden and many Swiss police forces use it.  The pistol pictured here is an ex-Staffordshire Police (UK) gun.  (You can just make out the rack number ’11’ scratched into the underside of the frame in the top picture).

Some of the guns sold in Switzerland differ from those sold elsewhere.  Often they are stamped with the crest of the Canton where they were issued.  However, more noticeably, a lot of them have a heel-of-the-grip magazine release rather than the standard thumb release button.  Also they are sometimes stamped “Montage Suisse”, having been assembled from German-made parts in the Hämmerli plant in Lenzburg, Switzerland.

So how did SIG manage to achieve the engineering feat of making such a compact 9mm pistol?  Well, quite simply they used a braided recoil spring: 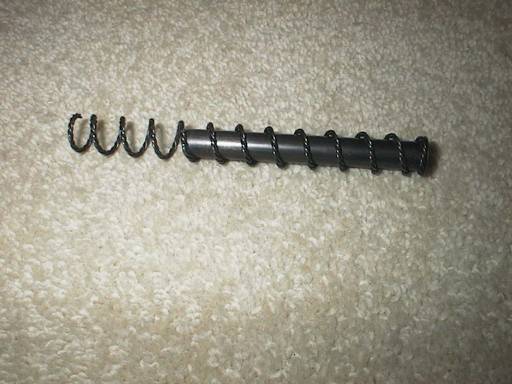 The problem with most compact 9mms of the time was that after a few hundred rounds, the recoil spring simply collapsed, having been “screwed” too tight.  The braided spring used by SIG-Sauer prevents this from happening, and allowed them to chop the necessary 2cm off the front of the P220 to make the P225.  It’s not as elegant as the dual-spring arrangement in the Walther P5 or the retarded gas recoil system of the H&K P7, but it works – and it’s a hell of a lot cheaper to manufacture!

Here’s a picture of the controls on the P225:

On the left, above the trigger, you can see the takedown lever.  Behind the trigger is the magazine release button, and above that is the decocking lever (that allows the hammer to be safely lowered on a loaded chamber) and behind that is the slide release lever.

Standard P225s as issued to the police have matte black sights, although commercially sold ones have white contrast “dot and bar” sights.  This particular gun came with the matte black sights, but I replaced them with some surplus SIG-Lite night sights, that have a radioactive tritium element in them: 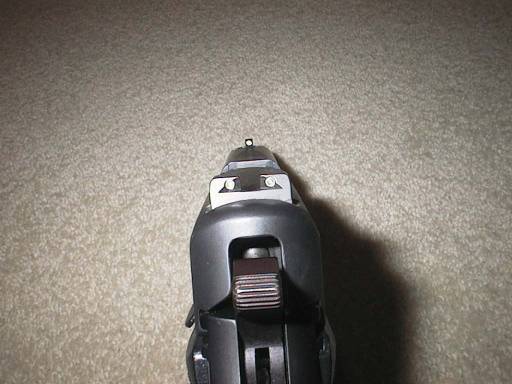 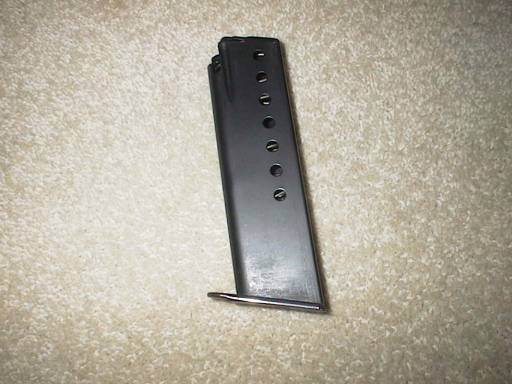 The P225 has not been made in many variations over the years, primarily because the main buyers have been the police.  Target shooters rarely show any interest in the P225, although in countries where it is legal to do so, it has sold to people who are interested in carrying a gun for self-defence.  The main variants of the P225 are the one shown here, and the much rarer version with the heel-of-the-butt magazine release.  It has also been made with various sight and finish options.  The most common finish encountered is the one shown here, but it has also been made with nickel and K-Kote finishes.  A version with a different hammer was also made for the German police.  The hammer has a cutout under the spur which was apparently intended for use with a retaining strap as demonstrated in this video.  So if the gun was used, the strap would have to be broken.

Nowadays the P225 is considered a bit dull, and few have been sold in recent years, mainly I think because of the later P228 which holds more rounds and also because the Germans have a newer specification for their police pistols that render guns like the P225 obsolete (although my view is that it is still a decent gun).  The P225 enjoyed a brief resurgence in the US after magazines holding more than ten rounds were banned from import or manufacture there.  In the US it is often marketed as a “backup” gun, although this was not what it was designed for.  Most frequently you will see them dangling from the belts of uniformed German and Swedish police officers.

I have considerable experience shooting the P225.  It has a very smooth trigger (at least all the ones I have tried have), and it is an easy gun to shoot well.  It’s not as accurate as some 9mm pistols, mainly because most of them came along after the P225 and more thought went into making them accurate.  The P225 is not an inaccurate pistol though, it’s more than adequate for police use, and is more accurate than some of the current crop of “cop guns” due to the excellent quality of manufacture.  I have read reports lately that some of the P225s imported into the US in the past year or so are very accurate indeed.  I’m not quite sure what to make of those reports, but the later P228 had the locking block underneath the barrel repositioned so that the barrel unlocked slightly later than in the P225, this enhances the accuracy of the P228 over the P225.

I’ve never known a P225 to jam and they are easy to strip and clean.  The main achilles heel of the P225, indeed SIG-Sauer pistols generally, is that the steel parts are finished with a simple phosphate finish that is not particularly rust resistant.  They do rust a bit too easily and thus keeping the gun well-maintained is important.

P225s will never command the interest of some other pistols, merely because Mel Gibson and co. have never mown down large numbers of baddies in a movie with them.  But for the serious gun collector it is an important design to be aware of and a worthy addition to a collection.  In addition, they are usually quite inexpensive, you can often find them deactivated for around £350.

For more information, you can look at the Swiss Arms website, (Swiss Arms took over SIG arms).  They don’t list the P225, although it is still in the print brochure, at a recommended retail price of €1,048.  There is a series of illustrations showing how they work on the Cybershooters website (although the pictures show a double-stack magazine). 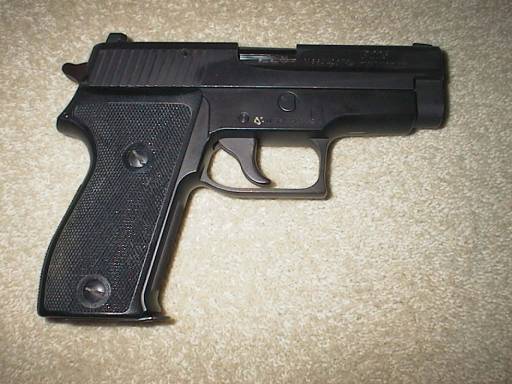