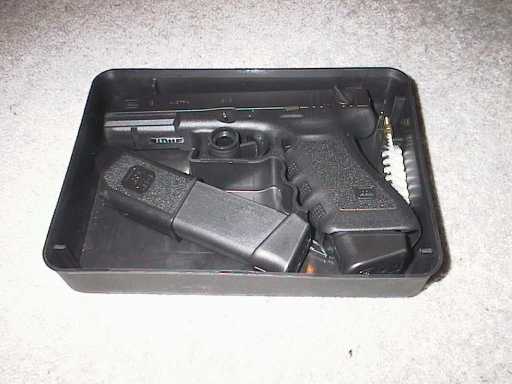 For our inaugural review, I thought I would choose the Glock 18 selective-fire pistol.  [This review was originally published on the Deactivated Gun Collector’s Association website in September 2000 – Ed.]

The Glock 18 is a pretty rare gun, as far as I know there are less than 20 in the UK, and even worldwide they are rare due to the restrictions on fully-automatic firearms.

For those of you who don’t know, the Glock 18 is a selective-fire version of the vastly more common semi-automatic only Glock 17.  The only external differences between the two pistols are the markings on the slide and the selector switch at the rear of the slide. 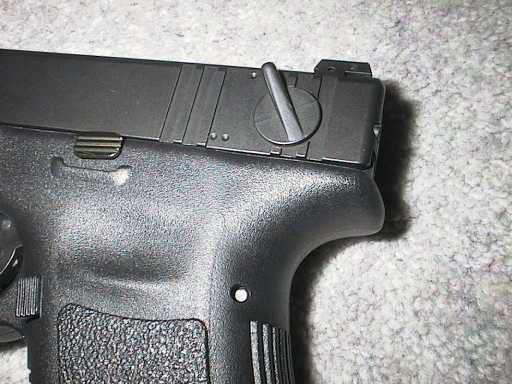 In the up position, the selector switch provides semi-automatic fire, and is in essence no difference from the Glock 17 in this mode.  Flip the switch down, and the Glock 18 provides fully-automatic fire at a cyclic rate of 1,300 rounds per minute!

The fire control mechanism for the Glock 18 is extremely simple.  On the trigger bar there is a tab of metal that protrudes upwards. 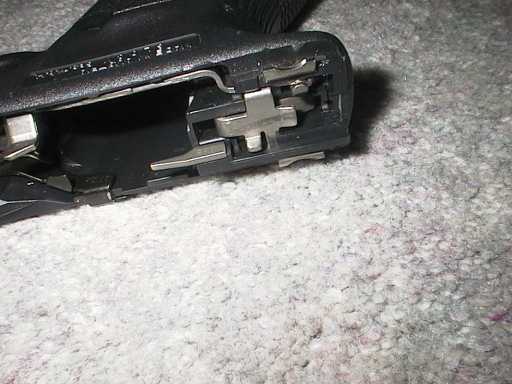 In the picture you can see this piece of metal just behind the ejector.

When the selector switch is in the full-auto position, a piece of metal protrudes downwards from the rear of the slide. 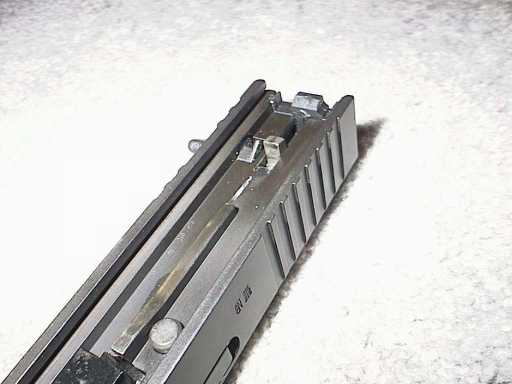 You can see it in the photo to the left of the rear of the striker.  When the slide moves forward during the reloading phase of the shooting cycle, this protrusion pushes downwards on the trigger bar, which in turn releases the striker right at the end of its cocking cycle, thereby releasing the striker (firing pin) to fire the round of ammunition.

All of this happens very, very, quickly of course, and although I have never fired a Glock 18 on full-auto, I have fired enough small SMGs like the MAC-10 and Mini-Uzi to know that controlling this lightweight pistol must be very difficult, and various articles I have read indicate it takes a considerable amount of practice to be proficient.  This is compounded by the extremely high cyclic rate.  To mitigate against this, Glock makes a 31-round magazine (or 34-round with the “+” floorplate attached). 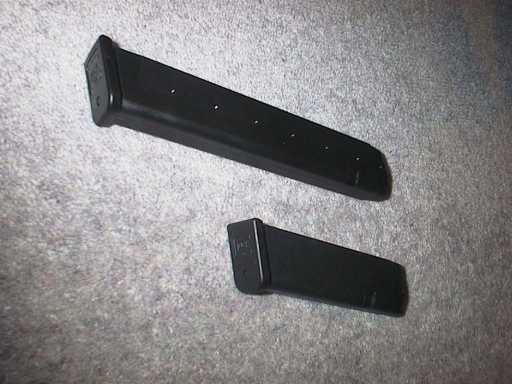 The 31-round magazine is shown above a standard Glock 17 magazine in the above picture.

The problem of course is that you can’t exactly carry a Glock 18 in a holster with one of these things sticking out the grip, so Glock has an accessory “+” floorplate for the standard 17-round magazine to increase the capacity to 20 rounds. 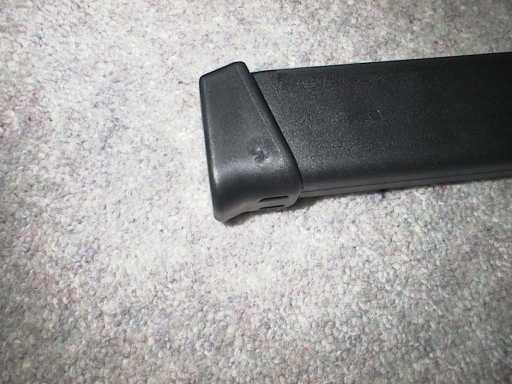 For those of you familiar with Glocks, this is a new floorplate design that adds three rounds to a 9mm magazine, as opposed to the older design which added two.  Glock redesigned the floorplate so that it offered plus two capacity for .40 and .357 magazines.

Even with a twenty round magazine in place, at 1,300 rpm you will run out of ammunition fast in full-auto mode!

Why on Earth did Gaston Glock design a fully-automatic pistol?  This is one of the most asked Glock questions.  Controlling such a beast is well nigh impossible except for the most well-trained operator, and any such gun clogs up so fast with carbon and debris that it’s use would be limited to the most specialised needs.  Glock themselves offer a training course specifically for the Glock 18, and at one point (not sure if they still do it) they wouldn’t sell them to any customers in the US until they had taken the course.

In 1983 when Gaston Glock designed the original Glock 17, he envisaged that there would be a wider market than just the Austrian military, for whom the 17 was designed.  Consequently, he designed the 17L for target shooters (basically a 17 with a longer slide) and the fully-automatic 18 to increase the appeal of the gun to the police and military markets.  Little did Gaston know that a few years later paranoia about “plastic guns” in the US would increase demand for his polymer-framed pistol to unforseen levels, and provide the impetus for the slew of other Glock models that have subsequently been produced.

Sales of the Glock 18 appear to have gone mostly to SWAT teams and the like, although apparently the Italian airport police carry them.

Mr Glock cleverly designed the Glock 18 so that you could not easily take a Glock 17 and change a few parts to make an illegal fully-automatic firearm. 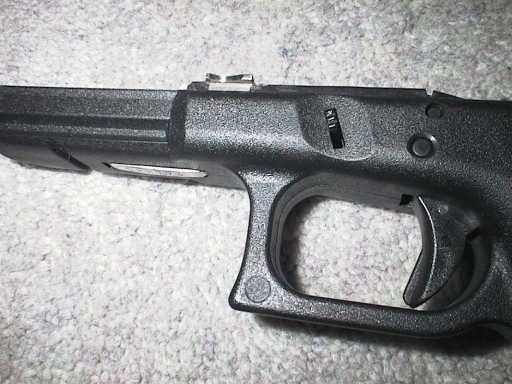 The frame rails on the Glock 18 have been raised slightly, as have the slots for them in the slide to prevent interchangeability between the frames and slides of Glock 17s and 18s.

The Glock 18 itself has gone through a number of redesigns over the years, in line with improvements made to the Glock range in general.  The latest model is pictured here with the new finger groove grips (which personally I don’t like) and an attachment rail for a light or other accessories on the front of the frame.  There is also another model called the Glock 18C.  This has a keyhole shaped hole in the top of the slide, plus slits in the barrel towards the muzzle, the idea being to keep the muzzle down on full-auto fire.  The method of compensation is different to the other Glock “C” models.  Reports I have read from people who have fired them indicate they could not tell any real difference between the 18 and 18C on full-auto.

Glock originally made a version of the Glock 18 with a barrel that stuck out of the end of the slide with much more aggressive cuts in the barrel.  Reportedly this did work quite well, but the increased length of the gun was a major downside.

I’ve shot many thousands of rounds through semi-auto 9mm Glocks.  Glocks are extremely reliable, although to get that reliability they are not as tightly put together as some of the competition and accuracy is not in the same league as a SIG-Sauer for example.  Glocks are probably the most durable pistols made, due to the Tenifer hardening process of the slide.  I’m not exactly sure what is involved in this process but here is a technical description of the process, anyway, 9mm Glocks last a very long time even when rarely cleaned.  When they do break, the slide usually goes first, cracking through the serial number under the ejection port.  (Why they don’t move that serial number to another location is beyond me).

An intriguing change in Glocks lately has been the addition of a legal warning on the back of the magazine. 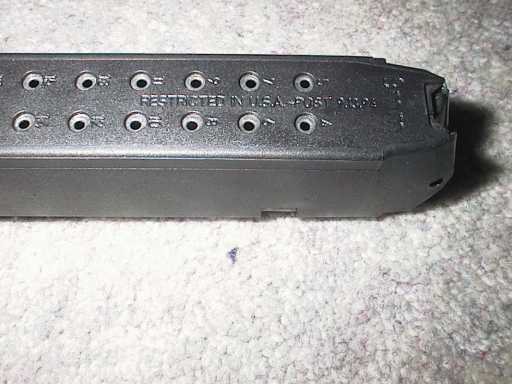 The message says “RESTRICTED IN U.S.A.-POST 9.13.94” to indicate the magazine is banned in the US (or was, until the ban expired in 2004), except for sale to the Government or law enforcement (and US law prescribes a different legal warning for those users).  Glock started marking magazines with this warning in 2000, because they were worried about the adverse publicity caused by people smuggling in post-ban large capacity magazines that are illegal under US law.

If you would like to add a Glock 18 to your collection of deactivated firearms, they are available to qualified dealers from the local Glock importer, depending on what your locale is.  In Britain your local Section 5 dealer can order one for you from the UK importer, however I warn you that they are not inexpensive, plus at the time of writing only ten have been brought in by the new importer.

You can also learn more at the Glock website.