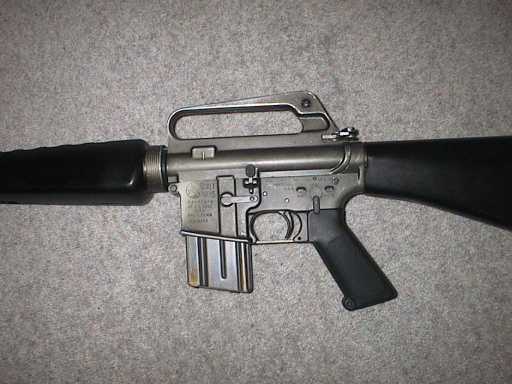 So much has been written about the M16 that it is impossible in a short review to cover a great deal of it, but here goes!

The M16A1 started out in the late fifties as the brainchild of aerospace enginee Eugene Stoner, who together with the Fairchild aircraft corporation came up with a series of designs under the division of “Armalite”.  The intention was to create innovative firearm designs that incorporated many of the new materials being used in aerospace design, such as fibreglass and machined aluminium forgings.

One of Gene Stoner’s earlier designs was the AR-10, essentially a larger version of the M16 chambered for 7.62mm NATO.  Stoner soon found himself redesigning the AR-10 into a smaller calibre version, the AR-15, chambering the .223 Remington cartridge invented for the US Army’s “Small Calibre High Velocity” (SCHV) programme.  Gene Stoner told me in 1993 that he much preferred the 7.62mm calibre, however, it is clear the AR-15 is a much easier rifle to control when firing fully-automatically with the smaller .223 round.  Following are some pictures of an original Colt AR-15 Model 01, the first AR-15 model made by Colt’s after they bought the rights from Fairchild: 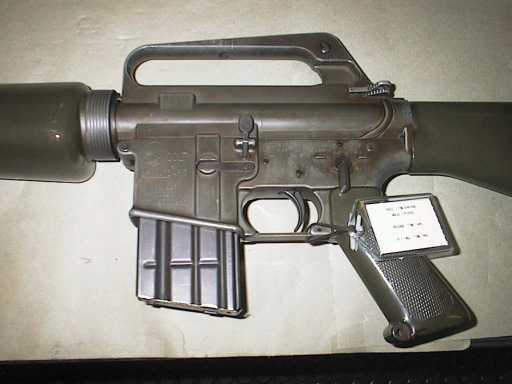 Note the green furniture and the “waffle” steel magazine, later magazines are made from aluminium.  The following picture shows the right side of the rifle, note the lack of a forward assist.  There are other differences that you can pick out.  One thing that is notable with this early rifle is that it is made to a much higher standard than later guns, being much more carefully machined: 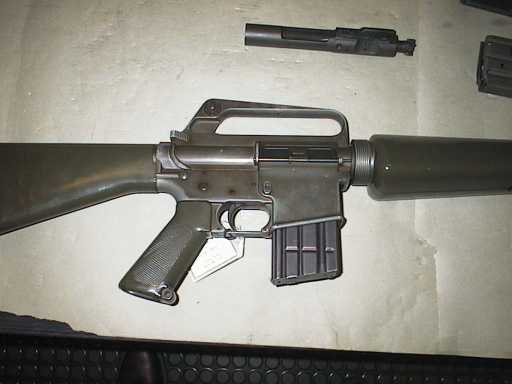 The following blurry (sorry) picture shows the flash hider and front sight.  Note the three-prong flash hider.  Later guns would have beefed up prongs, before the adoption of the birdcage suppressor.  Note also the machined front sight, made to a much higher standard than the later castings: 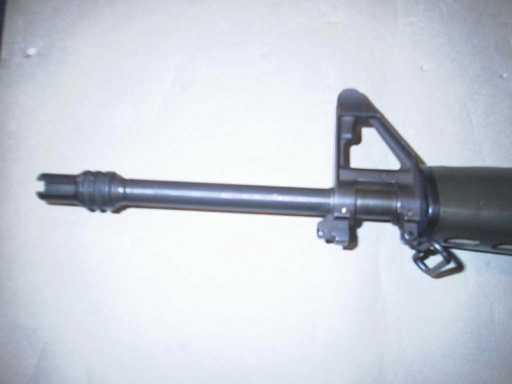 The AR-15 was so revolutionary at the time that it was not well-liked by the Ordnance Board who endlessly came up for reasons to reject it.  Colt’s had bought the design from Armalite, but it took several years to achieve any sizable sales.  One of the first buyers was the British Army, where it was issued to the SAS for use in Borneo.  Ironically their opponents, the Indonesian Army, were also among the first to use the new rifle.

The US Air Force tried several times to buy the AR-15 to replace their aging M1 carbines, but were not successful until the Kennedy Administration went into full swing in the shape of Robert McNamara.  President Kennedy was a life member of the National Rifle Association of America and an ardent gun buff.  How much personal involvement he had in encouraging the adoption of the AR-15 by the US Armed Forces is unclear, but Colt’s gave him two semi-automatic AR-15s and he wrote them a letter telling them how much he enjoyed shooting the rifles.  Robert McNamara was a former executive of the Ford Motor company, and could also see the advantages of the new rifle with its modern method of construction, despite the objections of the Ordnance Board.

To cut a long story short, eventually the AR-15 entered service with the USAF as the M16 rifle.  The Army was also forced to buy the rifle, but it was redesigned with a bolt-closure device and called the XM16E1 to indicate it’s experimental status.  The picture shows the “teardrop” emergency bolt closure device that was also incorporated into the M16A1. 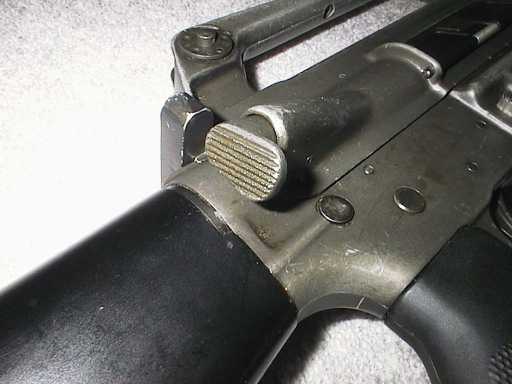 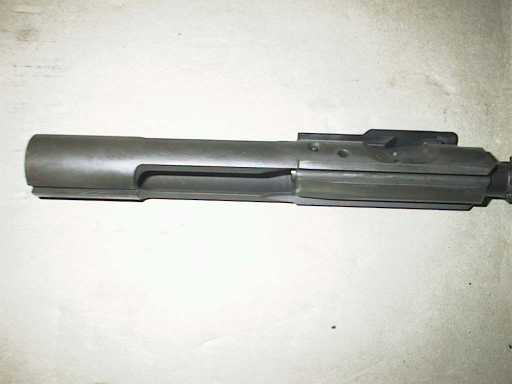 Many problems were encountered with the XM16E1 rifle in Vietnam, most of them due to poor ammunition and a lack of cleaning materials.  However, there were other problems such as a prong flash hider that caught on vegetation.  This was redesigned into a birdcage type on the M16A1. 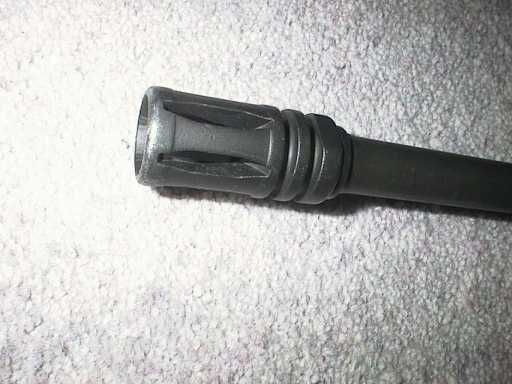 After over a hundred small design changes, the US Army and Marine Corps adopted the new rifle as the M16A1 in 1967.  The particular rifle shown here is an early one, shipped to Cam Ranh Bay in South Vietnam in early 1968.  This particular rifle pre-dates many later design changes, including the trapdoor buttstock.  This rifle has the older solid buttplate.  It also lacks the chrome-lined barrel found on later M16A1s.  The chrome-lining of the chamber was probably the most important change to the rifle in terms of improving reliability.  Later on the barrel was completely chrome-lined from the chamber forward, but Colt’s had to develop the technique for doing this with such a small calibre barrel first. 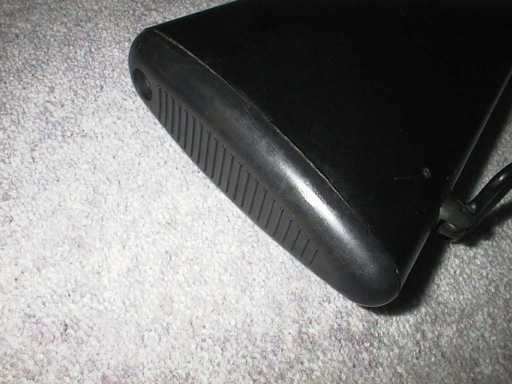 The M16A1 also has many distinctive identifying features the most obvious of which is the triangular handguard. 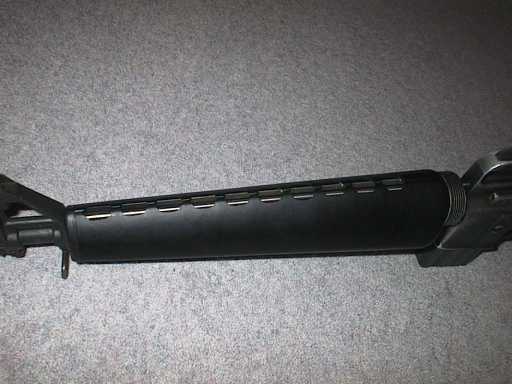 This is made from fibreglass and breaks easily, remember this was the sixties and plastics were not as sophisticated as they are today.  The pistol grip and handguard on this rifle were so badly worn that I had to replace them, but the buttstock is original.  I have noticed that the Israelis, who still use the M16A1 have started fitting them with the later A2 furniture which is made from much stronger modern plastics.  I suspect the original A1 furniture this rifle had degraded so badly because the Vietnamese stored them in cosmoline for twenty plus years.  Cosmoline works great on metal and wood, but not on fibreglass.

Also in the photo you can see the gas tube running from the front sight to the hole in the upper receiver where it piped gas into the bolt carrier.  This direct method of gas operation as opposed to the more traditional gas operating rod was another of the features that made the AR-15 design so innovative.  Unfortunately clogging of the gas tube was an early problem in Vietnam, due to the Army insisting on the wrong type of powder in the ammunition. 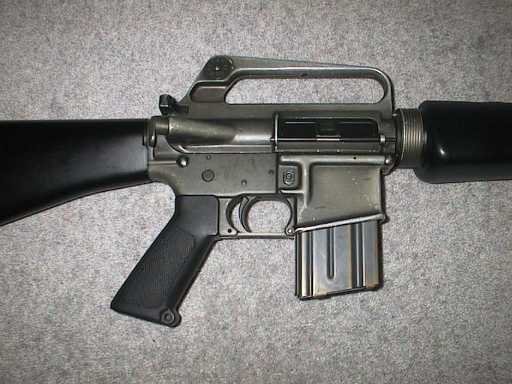 The M16A1 also has distinctive sights (at least compared to the later M16A2), consisting of a simple round screw-in front sight post that you can just pick out in the photo, 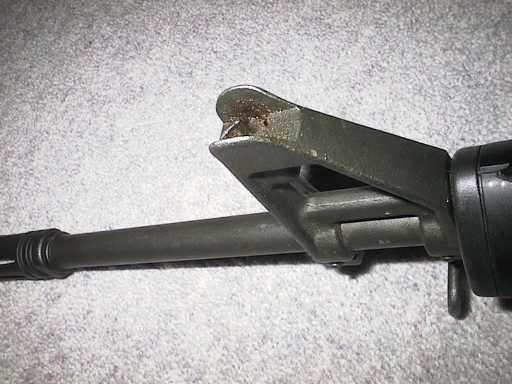 and a simple drum adjustable (for windage) rear sight. 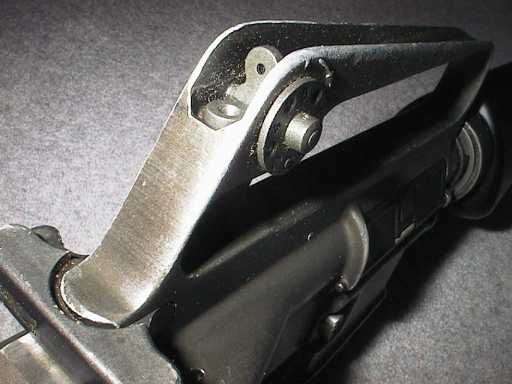 You can also make out the flip-up aperture, the two aperture choices have different heights, the shorter one for close-up “combat” shooting.

About seven million M16A1s have been made.  Many different companies have made the M16A1, including Colt’s, General Motors, Harrington & Richardson, Elisco Tool & Machine, Chartered Industries of Singapore (well, the M16 without the bolt assist) and also Daewoo.  Colt’s have made the most though.

It remains a classic firearm design, eventually becoming one of the best known assault rifles in the world.  It also eventually evolved into a very reliable firearm, and I doubt even today there is a 5.56mm rifle to beat it for reliability (okay don’t write in all you G36 fans).

The problem with the M16A1 however is that although it really was perfectly adequate, a lot of Americans in particular looked down their noses at it as the cartridge and the sights really weren’t up to much past 200m.  As the USMC still did known distance firing out to 600 yards and the Navy and the Air Force were doing hopelessly with it in rifle shooting competitions (due to the fact that the Army and the USMC still used the M14 for this, which the USAF and USN never adopted), the M16A1’s days were numbered and as soon as enough of them wore out the US Marine Corps went looking for an upgraded rifle.

Although it has been obsolete since the mid-1980s, the M16A1 is still in heavy use, principally by the Israelis and Filipinos.  Millions of them have been distributed worldwide as US military aid, and the North Vietnamese captured a million of them when South Vietnam fell.  This particular rifle can be identified as one of those from its markings, the serial number identifies it as one shipped to Vietnam. 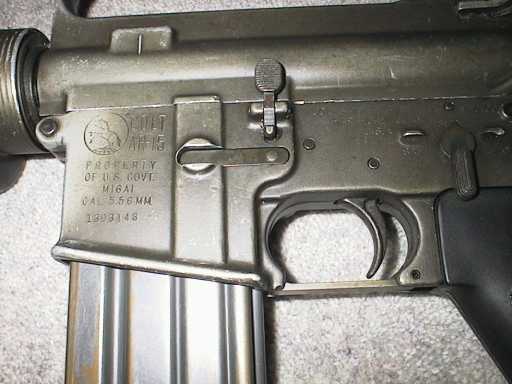 As you can see it bears a US Govt. property stamp.  Vietnam distributed their captured M16A1s quite widely during the 1970s and 1980s, many of them showing up in central America, especially El Salvador in the hands of leftist FMLN guerillas.  Even North Korean spies captured in South Korea have been armed with them.

For many years the US laid claim to these rifles and other equipment left in Vietnam (even though technically it had been the property of South Vietnam), until relations warmed with the US in the early 90s.  However, even now the US Dept. of State places heavy restrictions on the import of ex-US war materiel into the US, so the Vietnamese have been forced to turn to other places to sell their captured booty.

Obviously one place has been to arms dealers selling deactivated guns in Europe, and that is how this gun found its way into the UK.  These imports represent the best way to get your hands on a genuine ex-US M16A1.  Occasionally you will come across old Israeli surplus but it is usually in very poor condition.  Most Vietnamese surplus is still in one piece and in good condition.  Some of the ones I have seen have been basically in new condition, including a mint XM16E1!  If you are very lucky you might come across a commercially exported Colt M16A1, which lacks the US Govt. markings, but I have only seen one of these.  Just as a matter of interest the export model has the model number 613, whereas the US Govt. guns have the model number 603.  There are also a large number of the semi-automatic only SP1 Sporter rifles knocking about, but they obviously are less interesting than the military guns.

If you want an M16A1, you can find them at arms fairs, however people have less interest in them since the deactivation standards were tightened in 1995.  Pre-1995 guns are available but the prices continue to move upwards and presently you will be hard pressed to find one for less than £650, if that!

The M16A1 is an important milestone in the development of small arms however, and as such will remain an important part of any gun collection. 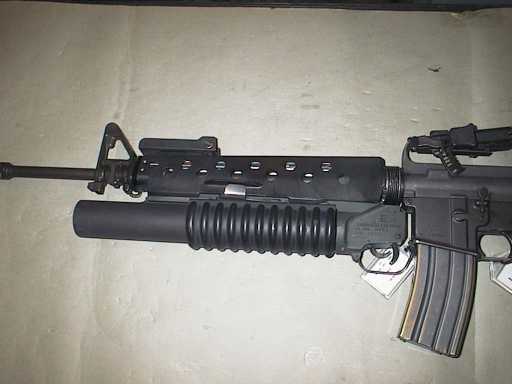 This is an M16A1 fitted with an M203 grenade launcher.  This is a 40mm single-shot pump-action weapon.  Note the quadrant sight mounted on the carry handle of the rifle.