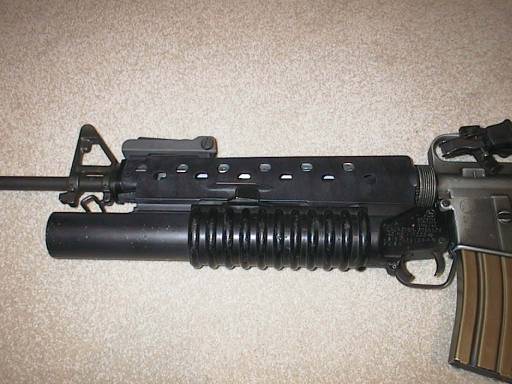 The M203 is one of the world’s most interesting small arms, although it has been badly misrepresented in feature films and consequently there is a lot of nonsense flying about concerning what it is and what it can do.

It is a single-shot, 40mm calibre grenade launcher, however, many other types of munitions have been developed for it over the years, two of the most popular alternatives are flares and “canister” rounds, essentially overgrown versions of a shotgun buckshot round.

The M203 was developed during the Vietnam War as a replacement for the robust M79 grenade launcher.  Although the M79 was a reliable weapon, the boffins in the ordnance department wanted something that was both an “area” weapon and a “point” weapon.  An area weapon, as the name implies is designed to be used to attack a certain area, such as a piece of ground with soldiers standing on it.  A point weapon is a weapon designed to deliver projectiles to a specific point, i.e. a specific enemy soldier.

Early prototypes of this concept, known as the “SPIW”, wasted huge amounts of taxpayer money and were eventually deemed impractical.  However, eventually it was realised that by mounting a grenade launcher on the standard infantry rifle a similar concept could be achieved.

There were many attempts at grenade launcher mountings during the Vietnam War.  One of the early promising designs was the Colt XM148, which had a barrel which tilted down for insertion of the grenade, and then swung up again and locked.  The launcher was cocked by pulling back on a large spring-loading firing pin assembly.  However, it was found in the field to be too difficult to operate as the cocking mechanism was too stiff, and also because the receiver cracked easily.  The trigger mechanism was also too complex.

Thus the Army Ordnance boys went back to the drawing board and duly announced the GLAD programme, short for: “Grenade Launcher Attachment Development”.  To cut a long story short, the company of AAI (formerly Aircraft Armaments, Inc.) developed the best launcher, and it was adopted as the M203.

Ironically, Colt’s, whose own design had failed in the testing, ended up being licensed to produce the M203 and has produced several hundred thousand of them.  Many other companies have made similar or identical launchers, sometimes adapted for mounting on rifles other than the M16, most of them are licensed copies of the Colt M203.

One of the first things you notice about the M203 is how thin the barrel walls are: 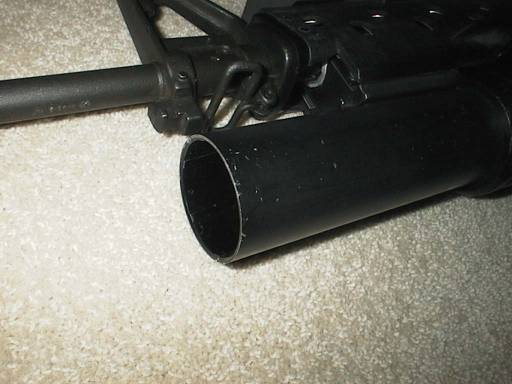 The grenades work on what is called a “high-low” ignition system, when the primer is detonated by the firing pin, a pressure of about 37,000 psi is generated inside a small chamber (that also holds the primer) in the base of the 40mm round, then the pressure flows out into the much larger chamber underneath the grenade, creating a pressure of about 3,000 psi which propels the grenade out of the barrel.  The grenades also incorporate an arming system which requires a certain number of rotations (imparted by the rifled barrel) before the grenade goes “live” and can explode, the minimum distance the grenade has to travel is about 25 metres (the grenade has a wounding radius of about 5 metres).  Therefore when you see Arnold Schwarzenegger blowing open doors with an M79 in Terminator 2 be advised this is pure fiction as the grenades would simply bounce off the door.  Having said that there is a version of the grenade, the M433, called the “dual-purpose” round that has a shaped charge at the tip in addition to the standard shrapnel grenade which can penetrate armour plate, but it still has to travel 25 metres before it is armed.

Contrary to what you see in the films, the M203 can also only fire one shot before being reloaded.  This is accomplished using a simple pump-action mechanism.  A tab on the side of the launcher is pressed down, then the entire barrel assembly is slid forward: 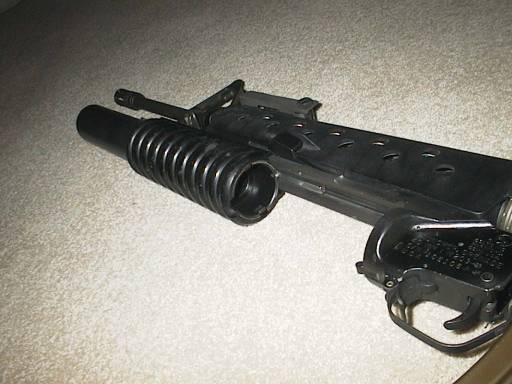 The grenade (or flare, etc.) is inserted and the barrel is slid backward where it locks shut.  The launcher is fired by pulling on the trigger, using the magazine of the M16 rifle as a pistol grip: 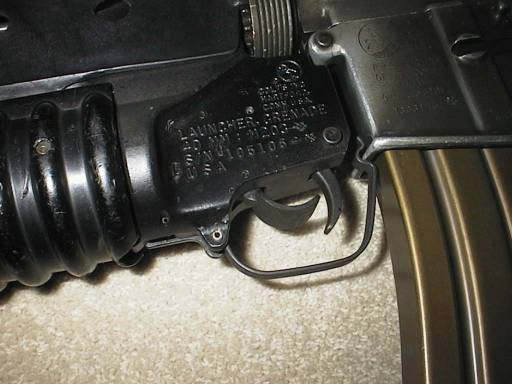 In the picture you can see that the safety is on, this is the lever in front of the trigger which is pulled backward to apply the safety.  The safety lever is simply flipped forward with the trigger finger, and then the trigger can be pulled.

To aim the M203 there are two sighting systems, the first is a ladder sight attached to the top of the forearm: 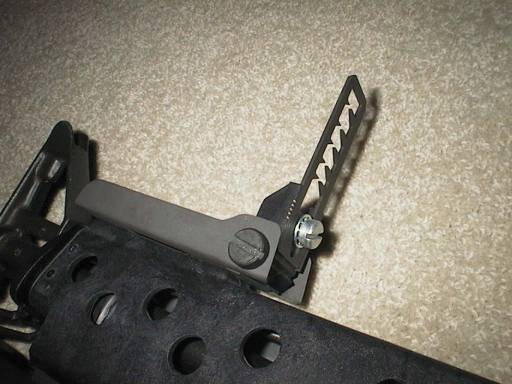 This is flipped up, and the launcher is sighted by sighting through the ladder and matching the correct rung (marked with a distance, e.g. 100m) with the top of the front sight post of the rifle.  This is pretty crude but good enough.  The main problem is that a lot of people can only do it by holding the rifle butt on the hip which is not the best idea on a battlefield, but I’m told with practice shots can be fired accurately from other positions.  Indeed, very skilled grenadiers don’t use the sights.

For those of us who are target shooters and like precision, there is another sighting system available, called a quadrant sight.  It attaches to the carry handle: 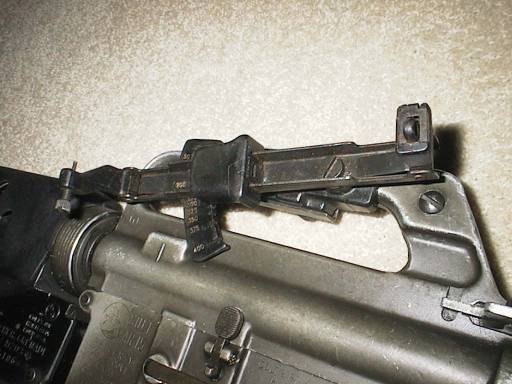 This is more complex and thus more fragile.  The front sight post visible to the left on this picture is lined up through the aperture at the rear of the sight, to the right side of the photo.  The elevation for the launcher is chosen by picking the range on the range quadrant, the bit of plastic visible with the numbers on it in the photo.  Obviously elevation has to be pretty severe given the low muzzle velocity of the rounds, and the launcher is similar to a mortar bomb tube in this regard.  Essentially the launcher lobs the grenade into the target area.

More recent versions of the quadrant sight I have seen use an optical sight on the sighting rail.

The M203 has been in service virtually unchanged since 1969, although attempts have been made to improve it and adapt it for other rifles.  The main gripe levelled against the M203 is that it is very hard to attach to a rifle, and I have to agree, it is a pig to get the thing bolted on.  For this reason, interface systems have been developed to make it easier, such as this effort from Diemaco: 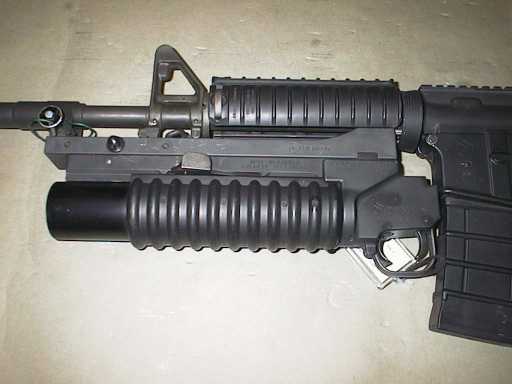 The problem is that it doesn’t really help and simply makes the thing more complex than it needs to be.  The M203 has an aluminium hoop and a loop that has to be attached around the barrel to hold the thing on, and this has caused problems on M16-type guns with thicker barrels.  However my personal view is that a bigger loop is what is needed, rather than these endless efforts of more complex mounts and cutouts in barrels (such as on the M4).  Note also the shorter barrel for the carbine in this picture.  Once again, not really needed, the longer barrel of the standard M203 does not extend past the muzzle of the carbine.

There are also mounting systems for other types of rifle, none of them are as ergonomic as the standard launcher on a standard M16 rifle, in my opinion.  This view was backed up by 5 Airborne Brigade who ended up buying Diemaco C7 rifles fitted with M203s for their grenadiers, rather than the SA80 rifle fitted with a grenade launcher that was developed by Royal Ordnance.

Obviously the M203 has appeal to collectors as it is so ubiquitous.  Prices for M203s range from £200 up, but the trick is finding one as they are hard to come by.  You will usually pay a lot more than £200 for one.  The other bigger problem is finding a rifle to mount it on, as most deactivated M16s I have seen have had the barrel nut welded to the barrel which prevents the mounting of an M203.  Plus it must be an M16 or AR-15 with the right diameter barrel, the target versions with the heavy barrel cannot mount an M203.

One point I will make although it probably won’t help is that it is technically still legal in Great Britain for a collector to possess a live M203.  Grenade launchers are banned by Section 5(1A)(c) of the Firearms Act 1968 (as amended) but there is an exemption for collectors in Section 5A(1).  The overall length of the M203 means it may be classed as a “small firearm” and caught under the handgun ban, but because it is designed to be mounted on a rifle I don’t think this section applies.

However, before you get your hopes up I will be amazed if any police force in the country will give authority for one.  I did meet a collector once who told me he had an M79 but that was before the prohibition in 1992 and I’m not sure if he’s still got it.