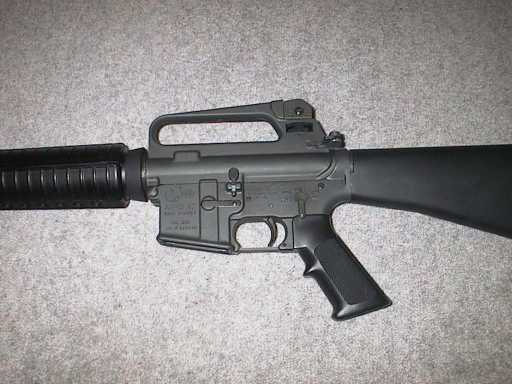 This is another in our series on the AR-15 rifle.  The AR-15A2 was introduced in 1986 when Colt’s started making significant numbers of M16A2s for the US military.  The AR-15A2 HBAR (which stands for Heavy Barrel Automatic Rifle) was the first serious attempt at making the AR-15 into a target shooting rifle that could really compete. 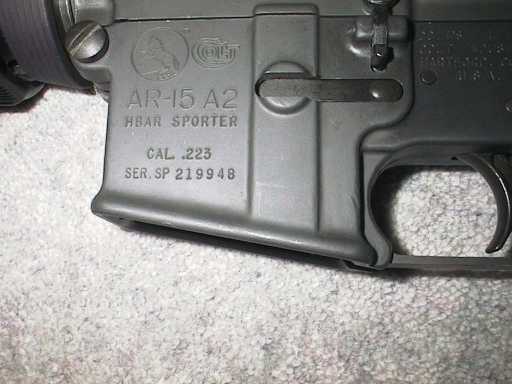 The original Colt AR-15 Sporter had been on the market since 1963, but interest in it was mainly confined to military gun buffs and military veterans.  Attempts to make the AR-15 into a serious target shooting rifle had largely failed, although this was mainly because of the lack of ammunition that would enable the AR-15 to compete at longer ranges successfully.

With the introduction of the M16A2 into Marine Corps service in 1984, things began to change as the USMC searched for ways to make these rifles competitive.  The USMC had decided that the M16A2 would replace the M14 as the rifle used in competitions.

To understand all this, you have to understand the USMC first.  Although the M16A1 had been adopted in 1967, the USMC had never been happy with it because their marksmanship training included shooting out to 600 yards, and the M16A1 was woefully inadequate for that.  By 1980, the USMC was able to use the reason that “declining inventories” of M16A1s meant they needed a new rifle.  This is a somewhat suspect statement as the Army had huge numbers of the rifle in reserve that the USMC could have had.

Anyway, the USMC put forward a proposal for an improved M16 that of course included features that the USMC wanted.  Another argument the USMC had was that NATO had recently standardised on a new 5.56mm round that the M16A1 could not use due to its slow rifling twist.

Colt’s responded to the USMC request in record time, due to the fact that they already had developed most of the things the USMC wanted during various development programmes during the 1960s, and it was not that difficult to dust them off and put them together.  The enhanced rear sight had been developed during trials for a Squad Automatic Weapon for example. 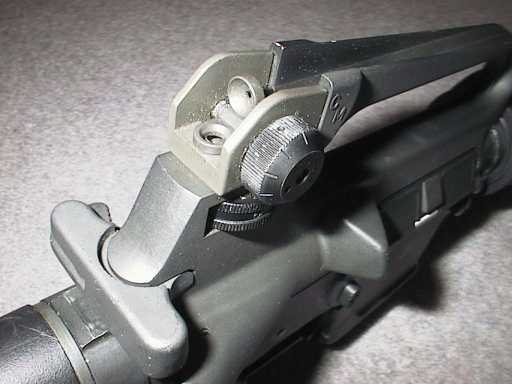 This sight allowed for elevation adjustments up to 800 yards, a USMC requirement.  Colt’s also came up with a new set of apertures, a smaller one for long range shooting and a flip up large aperture for close range.

The new rifle also had new furniture made from more advanced plastics.  The design of the new handguard was taken from a mid-1960s design. 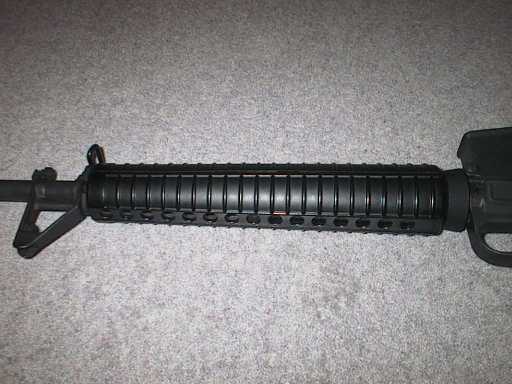 The Army hadn’t adopted it at the time as it would have meant a new handguard cap would have to have been fitted, but Colt’s redesigned the handguards so the original triangular cap could be used.  Another feature of the M16A2 is a burst-fire device, that replaces the fully-automatic capability of the M16A1.  Unfortunately this ruins the trigger pull, but of course it is not a feature of the semi-automatic only AR-15A2 intended for civilian target shooters.

The A2 also includes various other new features, such as a round forward assist 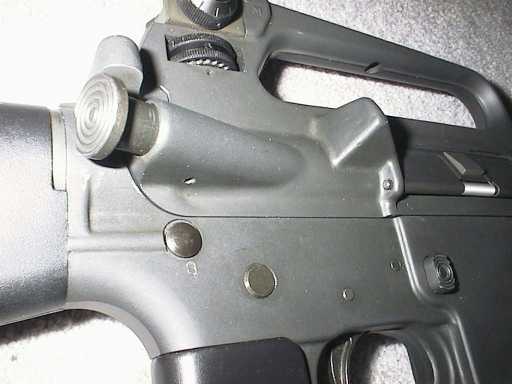 and case deflector (useful for left-handed shooters) and a compensator. 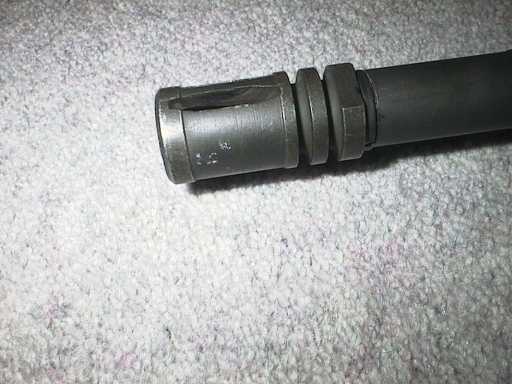 Note the lack of slots in the base of the flash hider, so that it acts as a compensator.  The buttstock is now 5/8 of an inch longer, and still has the trapdoor. 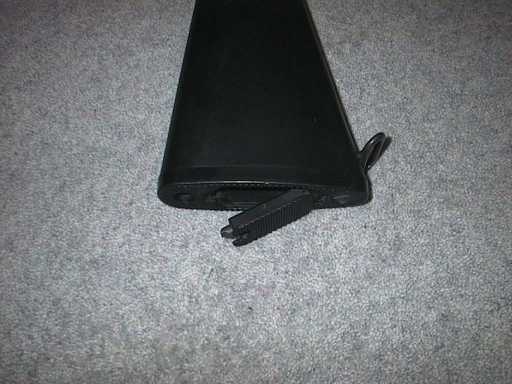 Because the Marine Corps have such a strong emphasis on marksmanship, the M16A2 was reasonable as a target shooting rifle in its own right, and Colt’s enhanced this further on the civilian model by putting a heavy barrel on it.  The USMC was forced to accept a barrel on the M16A2 that is slim from the front sight to the chamber in order to allow the mounting of the M203 grenade launcher, but target shooters don’t have this problem.

This rifle has a 1/7 inch twist, necessary for stabilising the long L110 (M856) tracer round.  Colt’s wanted to put a 1/9 inch twist on the M16A2, but the military had to refuse.  The problem with 1/7 is that it is such a fast twist that erosion occurs much faster than in the old 1/12 twist barrel on the M16A1.  Early Colt civilian A2 rifles like this one also have the 1/7 twist, originally this was considered a problem until heavyweight bullets started to appear in the mid-90s for long range shooting.  With the much longer heavyweight bullets a 1/7 twist barrel is an advantage, and it is no longer necessary to have the rifle rebarrelled for target shooting if you get a good one from the factory.  However, in USMC testing group sizes opened up by 90% after only 6,000 rounds.  The USMC blamed this on poor prototype ammunition, which is possible.  I have read about another test involving a Colt Sporter that had 10,000 rounds of Winchester USA fired through it with only a slight degrading of accuracy but Winchester USA has the old 55 grain bullet, so it’s not a fair comparison.  (Note the old M196 tracer bullet is actually slightly longer than the SS109/M855 ball bullet, so contrary to popular belief it’s not absolutely necessary to have a faster twist than 1/12 for the SS109/M855 bullet – often on the internet you will read nonsense about how dangerous or reckless it is to fire SS109 bullets through the old 1/12 twist barrels.  The reason for the 1/7 twist is for the M856 tracer bullet.)

The US Army issued a report heavily criticising the M16A2 for various reasons, an overly complex rear sight with no setting for less than 300 yard shooting, a burst-fire system that made the mechanism too complex, the fast rifling twist leading to very short barrel life and so on.  Unfortunately for the Army, the Joint Services Small Arms Programme (JSSAP) was in full swing, and with all the heat they were taking over standardising the Beretta M9 pistol there was no way that JSSAP were going to allow the Army to adopt a different variant of the M16, it was a political non-starter.  The Army gave in and started buying the M16A2 in 1986, two years after the Marines.

And this is why these civilian models became available!  This particular model was manufactured from 1986-1989 (the gun pictured is one of the first ones, made in late 1986).  In 1989 President Bush banned the import of semi-automatic “assault rifles” into the United States, and feeling the political heat, Colt’s decided to stop making the AR-15 for civilian sales.  Colt’s Firearms Division was then sold off and became the Colt’s Manufacturing Company and the AR-15A2 was reintroduced as the Colt “Sporter” rifle, with the bayonet lug removed and the lower receiver and mechanism substantially redesigned to make it harder to illegally convert the rifle to full-auto.  In the US these pre-89 rifles are highly sought after by collectors, as it is as close as most Americans can come to owning an M16A2.

All of the rifles you will encounter in the UK of this vintage were victims of the Firearms (Amendment) Act 1988.  About a hundred were imported prior to the ban going into effect in 1989, and most were deactivated.  They are about as close as we can get to owning a Colt M16A2 in this country.  I have seen one pre-95 Colt M16A2 but they are exceptionally rare indeed.  The one I saw may well be the only one in the country.  It is still possible to get M16A2s to post-95 (welded solid) specification, but Colt’s are very awkward about selling military weapons to private dealers (for obvious reasons) and I haven’t found anyone who has successfully done it yet.  Maybe some enterprising dealer will be able to buy some used ones from the Middle East! 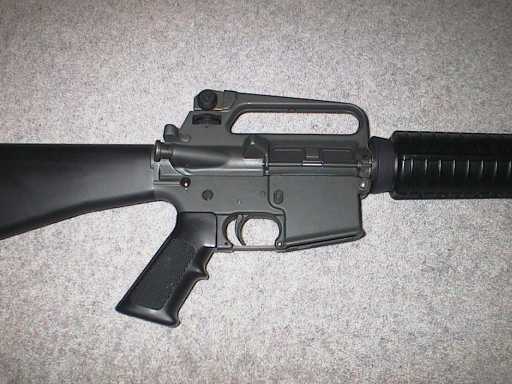