A visit to the Swiss military museum at Morges:

While in Switzerland recently your intrepid Editor decided to visit the Swiss military museum in the town of Morges, a picturesque town not far from Lausanne.  Approximately half an hour drive from Bière, the museum is a must-see for anyone attending the Tir Fédéral.

The museum covers the whole of the history of the Swiss military, though a large segment appears to focus on the Napoleonic Wars, due to the fact that the French-speaking areas of Switzerland were annexed by Napoleon and many Swiss served in the French Army.

Below are a variety of pictures of the exhibits in the museum: 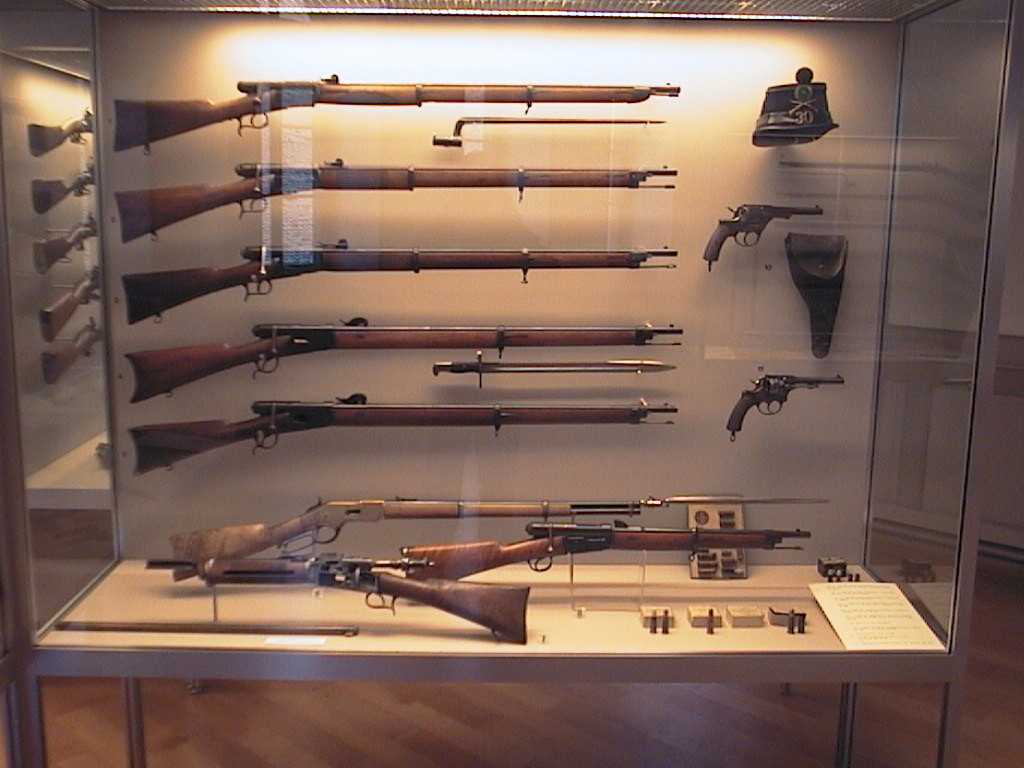 Pictured above are a selection of rifles showing the development of the Vetterli bolt-action rifle, the first bolt-action rifle issued to any army.  The rifle used a tubular magazine and fired a 10.4mm rimfire cartridge.  Below them is an 1866 Winchester rifle, fitted with a socket bayonet, a rifle used during military trials of the late 1860s. 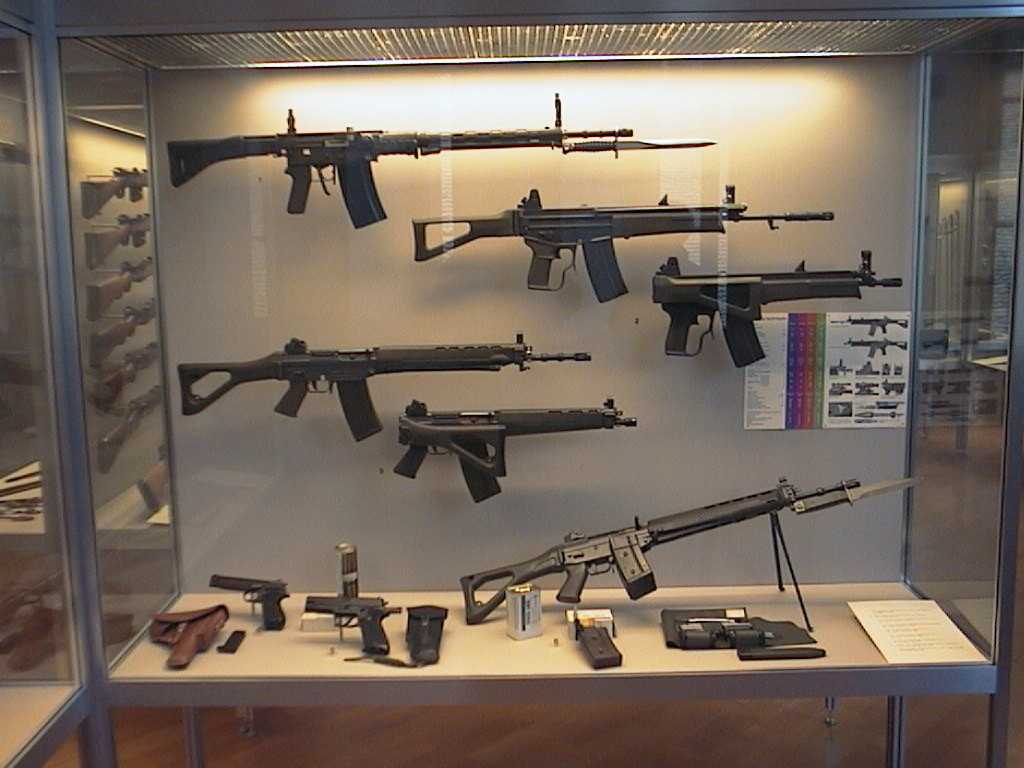 Pictured above are modern Swiss military weapons.  At top is the SIG 57 assault rifle, chambered for the 7.5mm Swiss GP11 round, originally developed for the M1911 Schmidt-Rubin rifle.  Below that are a number of prototype rifles, the top two being developed by the Bern Ordnance factory and the two below that being the SG541 developed by SIG.  These chamber the experimental 6.45 NSK round.  This round was eventually dropped in favour of 5.56mm, called the 5.6mm Swiss in Switzerland.  This round, the GP90, although having similar ballistics to the standard 5.56mm NATO round has a lead core with a mild steel/nickel alloy jacket.  The rifle at bottom is the SIG 90 assault rifle, adopted in 1986, essentially the SG541 chambered for the GP90 round.  To the left of it are the two current issue service pistols, the elegant and costly SIG A49 9mm pistol (P210) on the left, and the more common SIG A75 (P220) which is replacing the A49.  Both are 9mm. 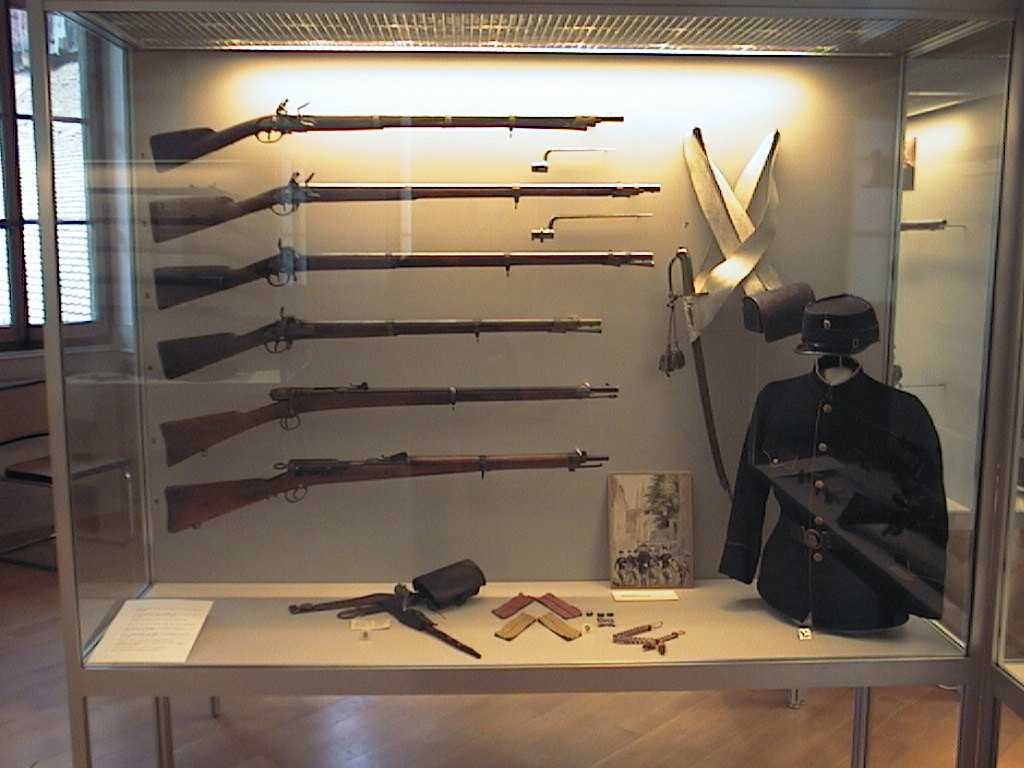 A selection of Swiss cavalry rifles, from when soldiers rode into war on horses.  At bottom is the Schmidt-Rubin M1889/00 cavalry rifle, of which only 7,000 were made.  However, it formed the basis for the famous K31, the standard rifle in World War 2 and perhaps the best known Swiss rifle. 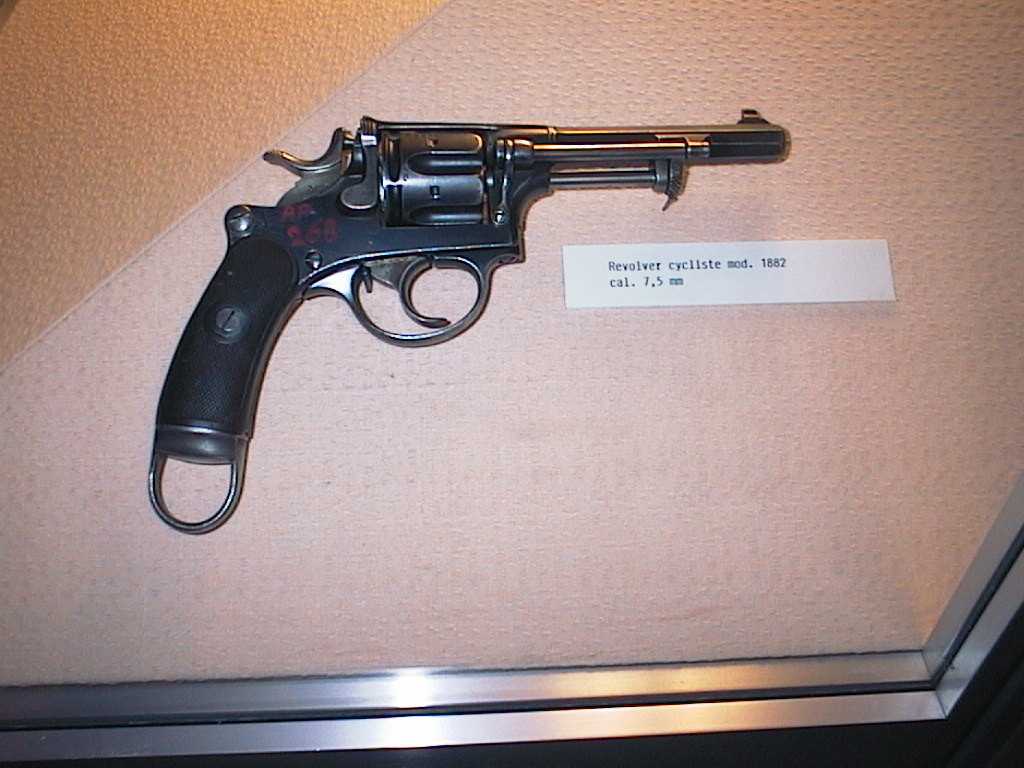 A rare 1882 7.5mm cyclist’s revolver.  The Swiss Army even today still has a cyclist’s corp.  They serve primarily as an anti-tank unit.  Hence the “mountain bike”, I kid you not!  Note the large lanyard loop on the butt. 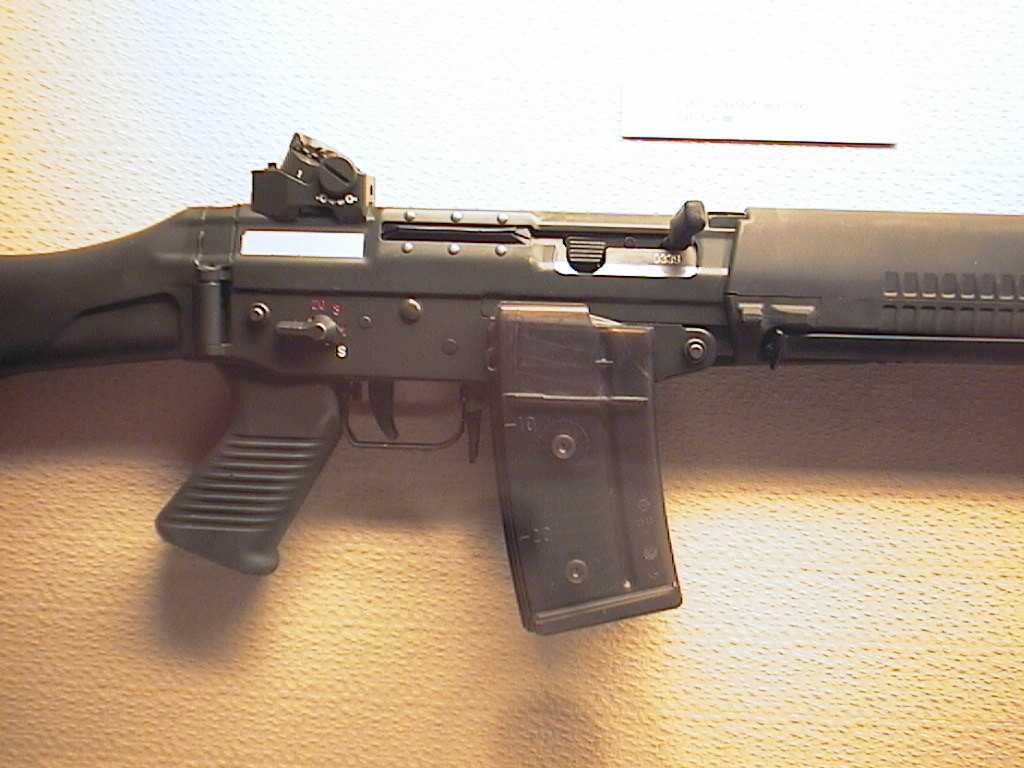 A close-up of an early production SIG 90 assault rifle, otherwise known as the SG550.  Having shot (and owned) one of these I can tell you that they are very accurate rifles.  The Swiss are very fond of target shooting and possibly this rifle makes too many concessions to sport, being heavier than most of the competition and being prone to rust.  It also is hard to clean.  However they are exceptionally reliable and robust. 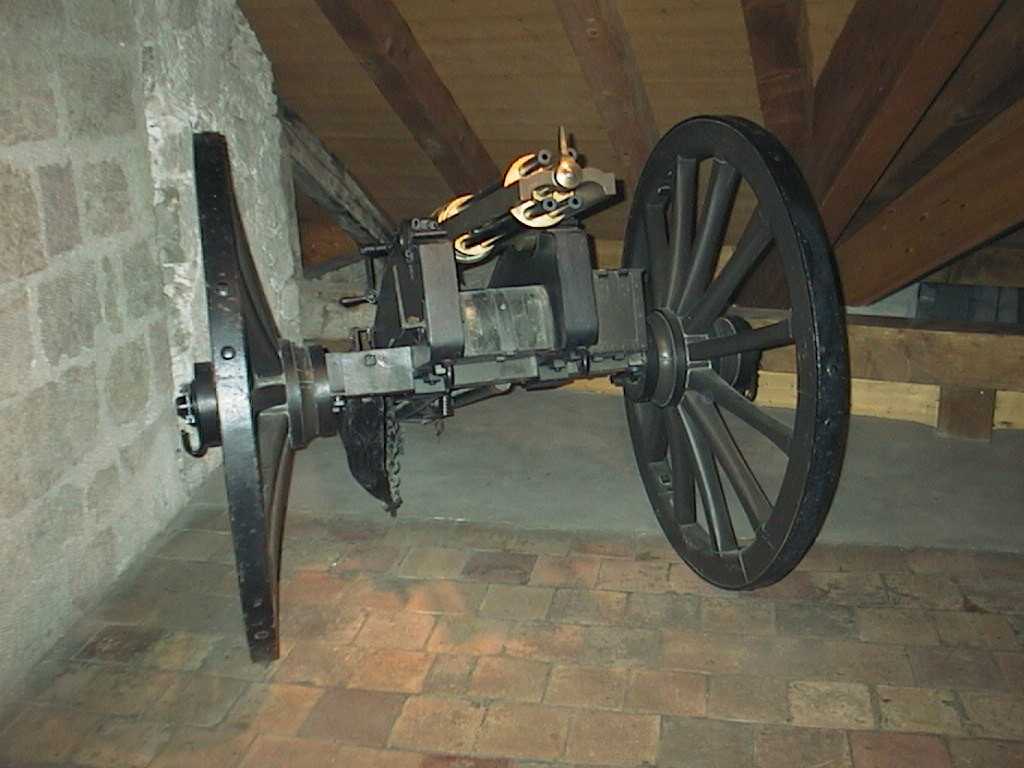 A very rare Swiss contract Gatling gun.  The Swiss are among the greatest pioneers in the area of firearms.  If they haven’t designed it themselves, they will buy it themselves as soon as it hits the market! 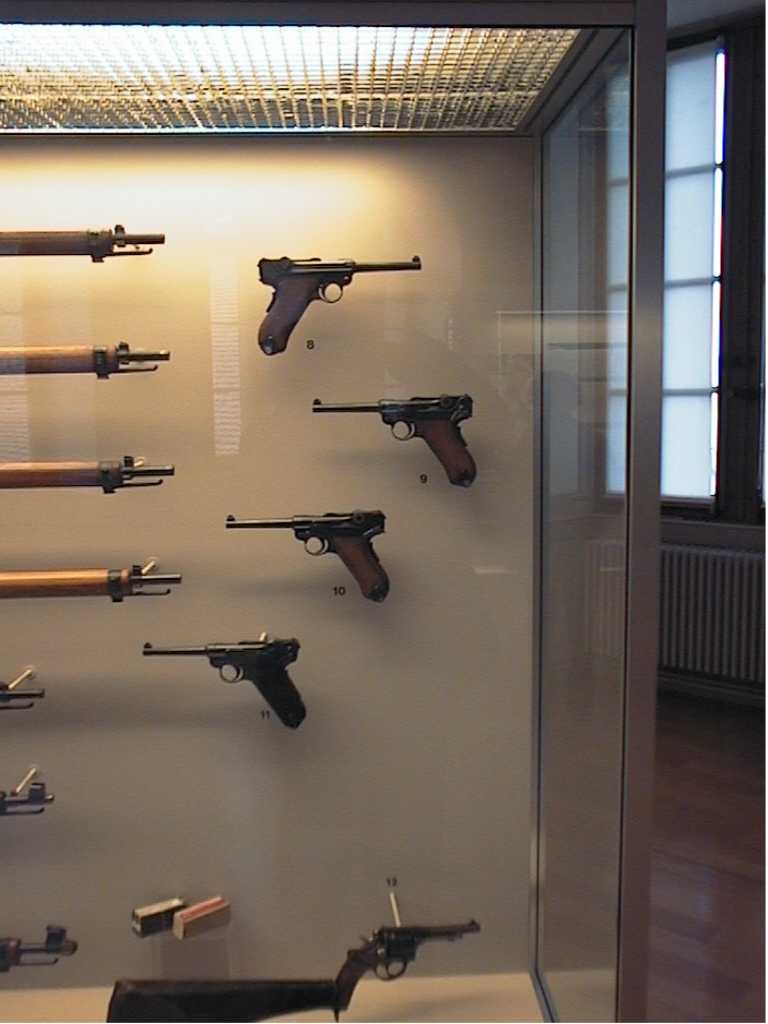 The Swiss were also the first Army to adopt the semi-automatic pistol, Georg Luger’s famous Parabellum, way back in 1900.  First deliveries were from DWM in Germany, but later production involved the assembly of DWM parts at the Bern ordnance factory.  When World War 1 cut off the supply from Germany, Bern began making their own Lugers, eventually simplifying the design.  Shown above are the four distinct models, from the first DWM Luger to the last Bern production model.  For some reason the Swiss chose to stay with the 7.65mm Parabellum calibre right up until the adoption of the SIG P210 in 1949.  Note the 7.5mm cavalry revolver with buttstock at the bottom. 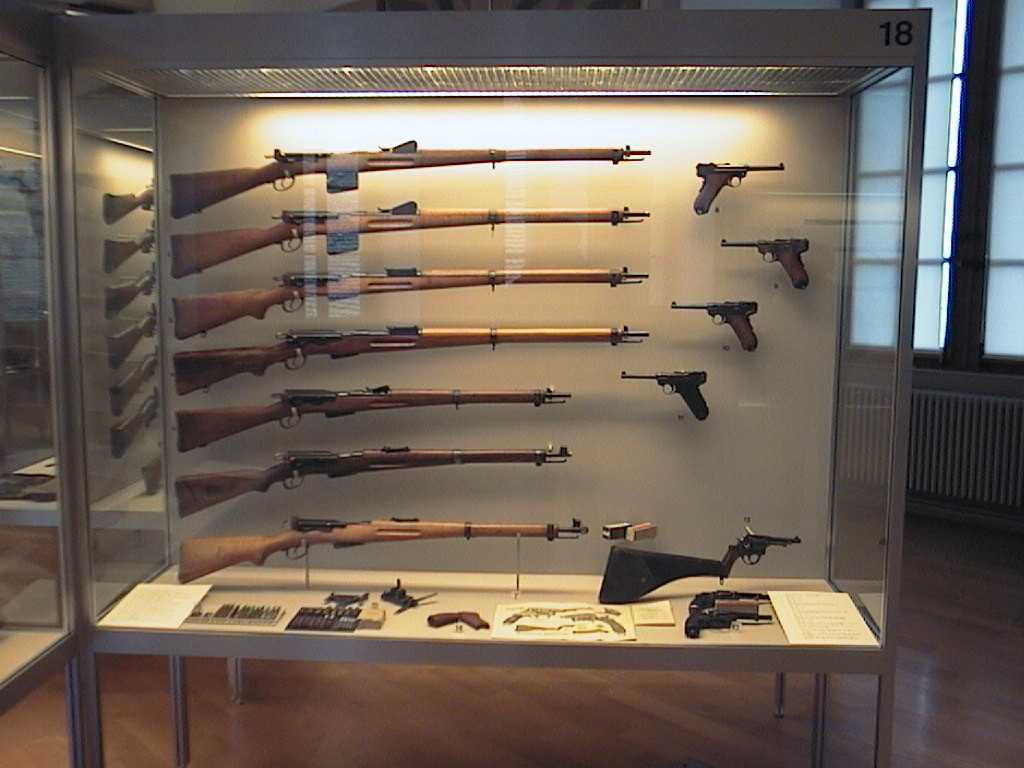 The history of the Schmidt-Rubin rifle is in this display case, these examples being based on the original 1889 design.  This was the first successful rifle to use a straight-pull bolt-action mechanism.  The top three rifles chamber the 7.5×53.5mm round, which is remarkably similar to the .30-06 used in the US Springfield and Garand rifles despite being developed more than a decade earlier.  Moving downward are later versions of the rifle chambering the 7.5x55mm GP11 round.  The middle rifle is the M1911 Schmidt-Rubin, standard issue in World War 1. 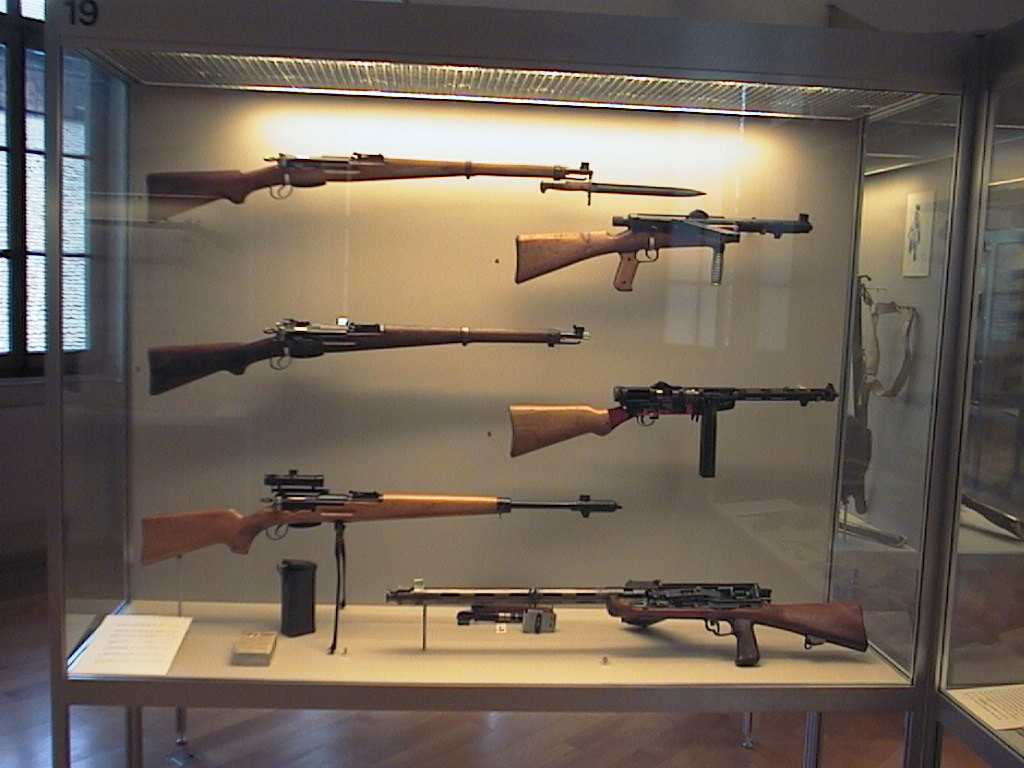 Swiss weaponry from the World War 2 period.  At the top is the prolific Karabiner 1931 or K31 Schmidt-Rubin rifle, chambered for the GP11 7.5mm round.  Note the sniper model of the Schmidt-Rubin with a remarkably advanced scope for the time.  Swiss submachineguns however were somewhat over-engineered and elaborate, the Swiss having the time to make them as they were not heavily involved in combat during the war, with the exception of shooting down some Nazi Messerschmitts! 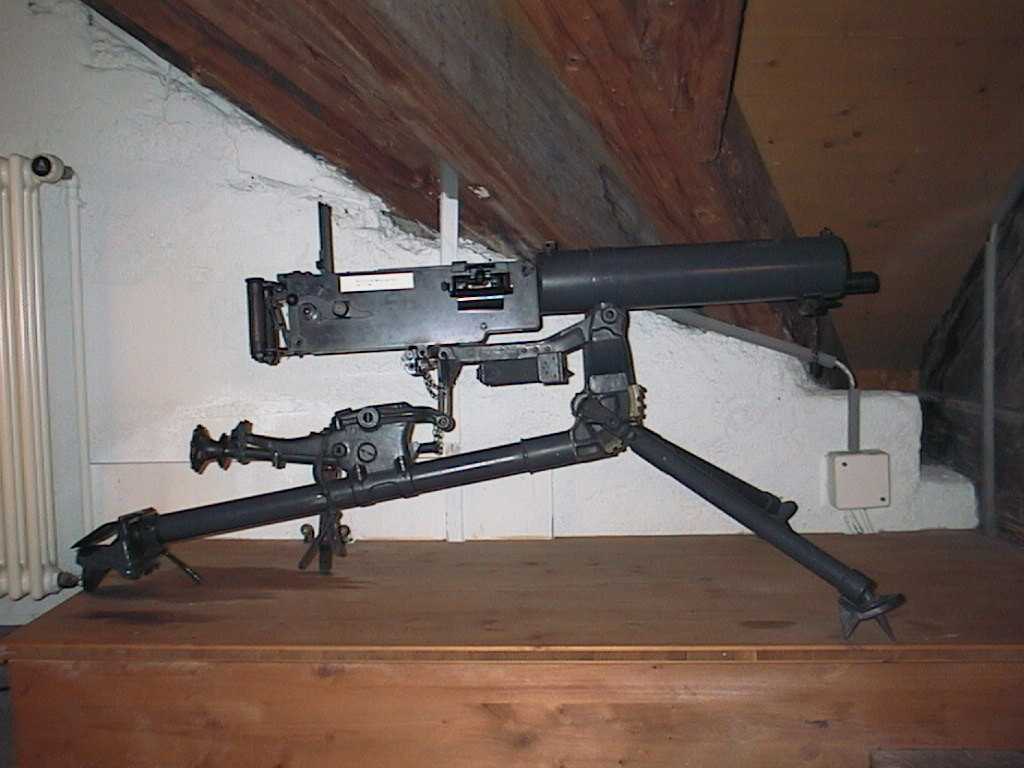 A Swiss Maxim gun, chambered for the GP11 7.5mm round.  Maxim guns of course were responsible for a large proportion of the casualties during World War 1.  The Swiss once again showed foresight in their acquisition, though they were neutral during the war. 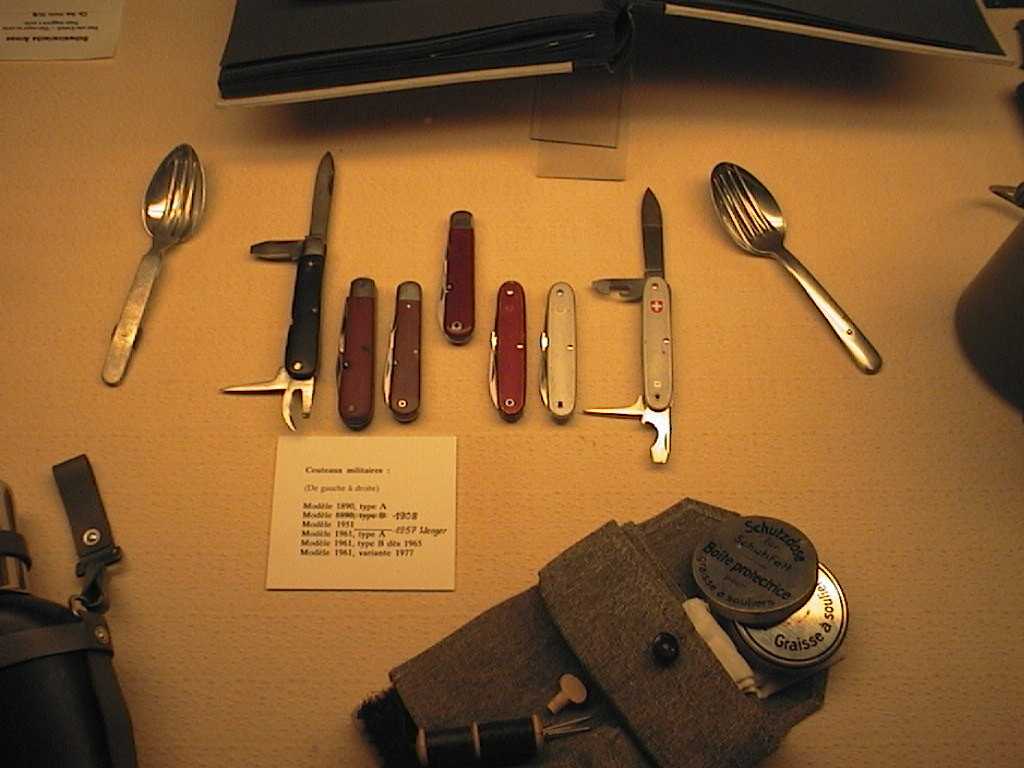 The history of the Swiss Army knife!  The current issue knife is on the right.  Victorinox and Wenger make this knife, it is called the “Swiss soldier’s knife” and is available at most good cutlery shops.  Note the lack of tools compared to the prolific commercial models, and the aluminium handle, more hard-wearing than the well-known red plastic grip.  The pointed tool at the bottom is not usually found on the commercial knives.  It is intended for puncturing food and ammunition cans, and for scraping carbon off difficult to reach areas of the assault rifle. 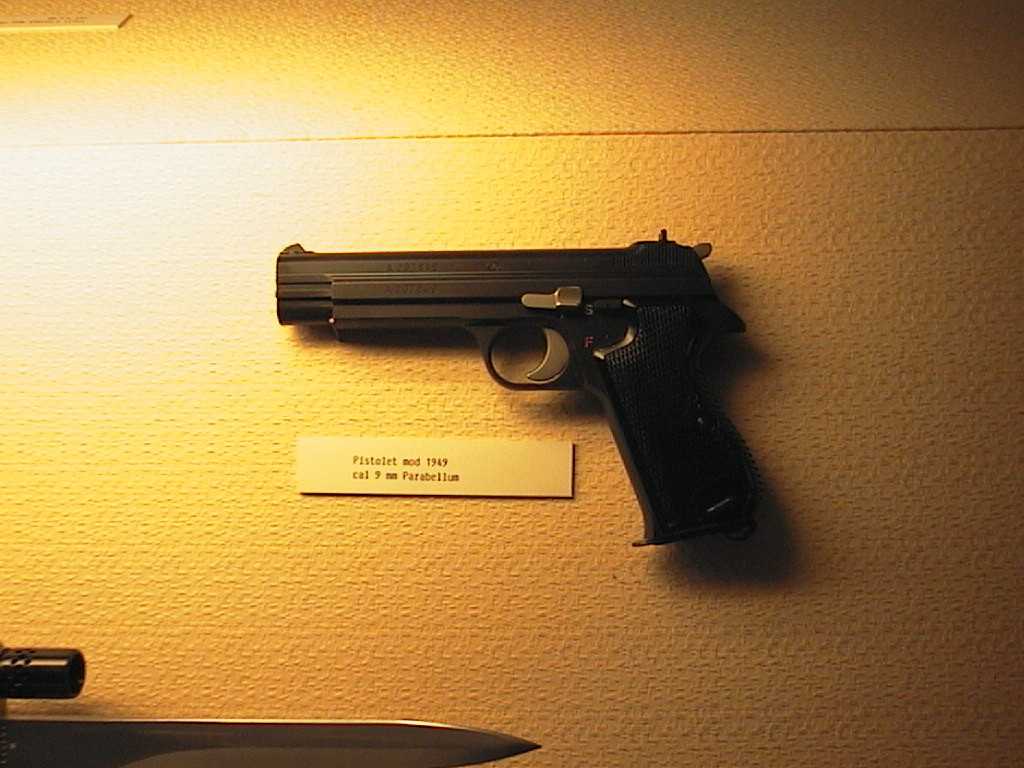 A close-up of the SIG P210, known as the A49 in Swiss military use.  Widely regarded as the best (and most costly) service pistol ever issued, and sought after by collectors and target shooters alike.  Note the design of the slide to frame fit, the slide runs inside the frame, a design feature not found on most other pistols, that contributes to the gun’s superb accuracy.  Pistols are given to officers in the Swiss military. 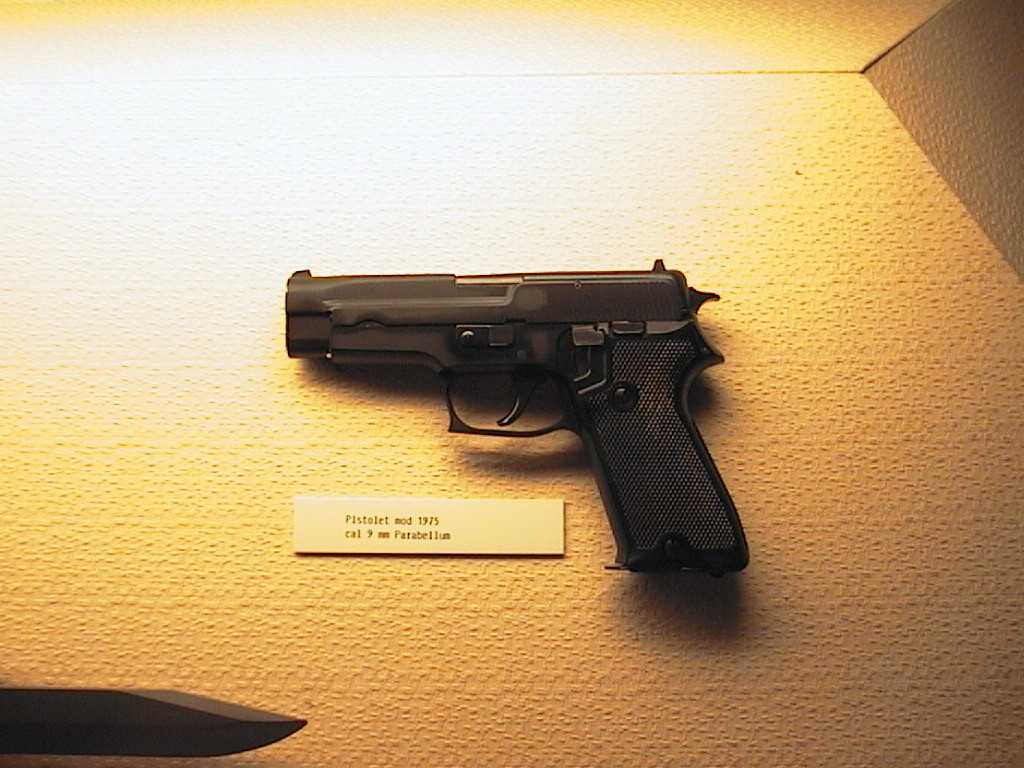 The current issue SIG P220, or A75 9mm pistol.  This gun was developed to replace the A49, which was simply too expensive to make.  The gun was the first to use the chamber wedge method of delayed blowback, which is exceptionally simple and cuts down greatly on the machining necessary to make the pistol.  This design feature has been widely copied, most notably by Glock and Ruger, two of the largest handgun makers in the world.  The P220 itself is a hugely successful design, over two million have been made of the different variations of it.  Another innovative design feature is the slide.  Most pistol slides are simply machined from a block of steel, but the slide of the P220 is made by shaping a piece of sheet metal over a mandrel, and then pinning a breechblock in place, greatly reducing the amount of machining necessary for production of the gun.  Most people will know of the P220 series as Mulder and Scully carry them in the X-files TV programme. 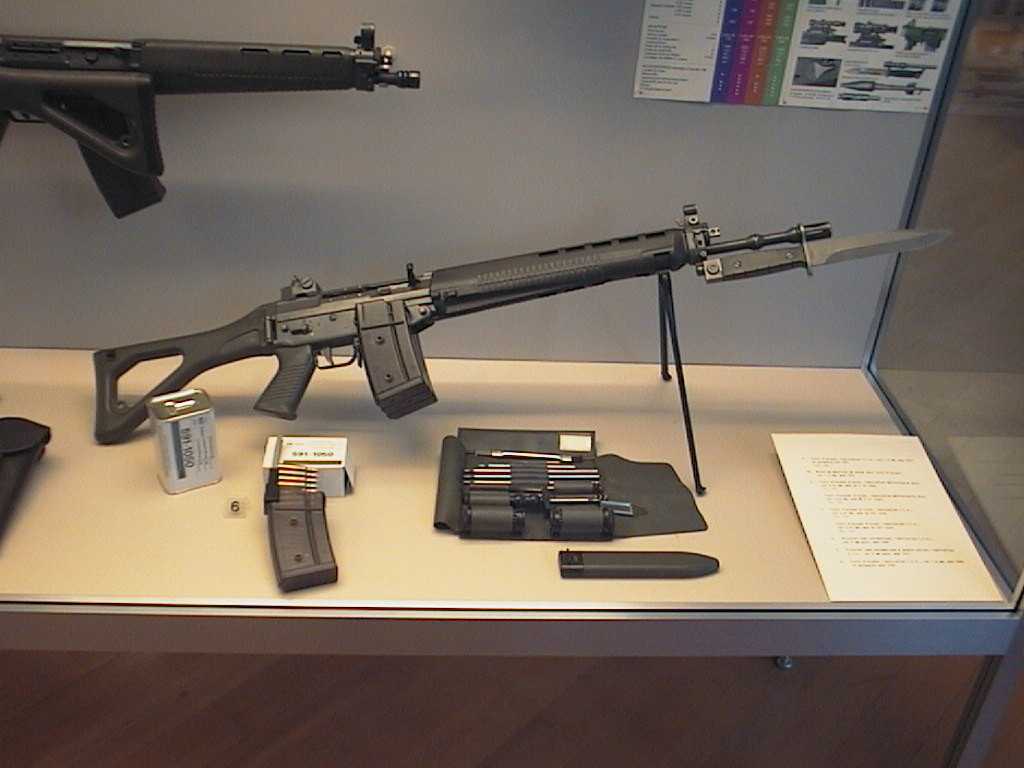 One of the most common things you will find in Swiss homes, the SIG 90 assault rifle.  The Swiss Army comprises 450,000 men who are given their service rifles and who have to complete a minimum of two weeks service each year, serving from the age of 18 until they are 50 (this age will be dropped to 45 soon).  After completing their service, the fully-automatic capability of the rifle is permanently disabled, and the rifle is given back to the former soldier who may keep it.  Soldiers are also issued a comprehensive cleaning kit, three 20-round magazines, and a “corn-beef can” of 50 rounds of 5.6mm ammunition, as well as a bayonet.  Swiss soldiers must practice their marksmanship regularly under the terms of the Obligatory Rifle Shooting Programme.  Switzerland has one of the highest rates of gun ownership in the world, yet maintains a remarkably low homicide and armed crime rate. 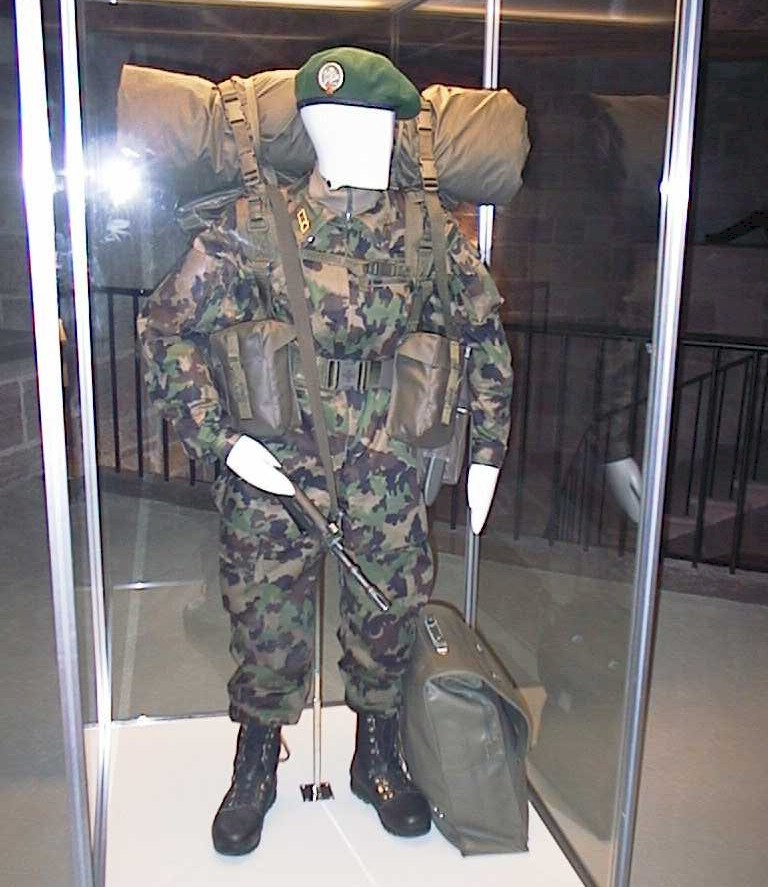 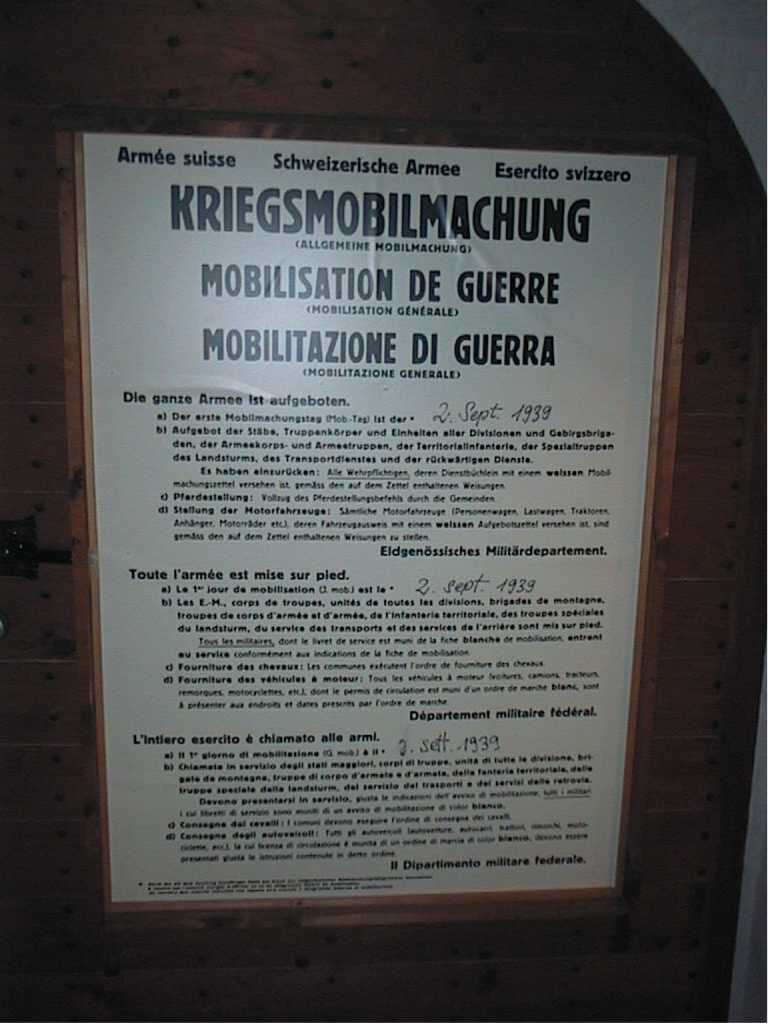 Swiss Army mobilisation during World War 2.  After some early border skirmishes with the Nazis, the Swiss did allow some German troop trains to cross their country into Italy, but later closed the border.  Although some skeptics believe Germany did not invade as Switzerland was a good place to hide their gold, the thought of attempting to cross the Alps and face the most heavily armed population on Earth at the time was probably a large factor in Hitler’s thinking as well.  Documents uncovered after the war indicated that the Nazis had intended to invade Switzerland.

If you would like to visit the museum, it is located south of the Morges exit from the N1 motorway, between Lausanne and Geneva.  Follow the road signs to Morges town centre, the museum is located at the Morges Chateau.  The museum is open every day from 1:30 pm to 5 pm, except over the Christmas period.  Opening hours are longer on most weekdays and during the summer.

“Shoot twice” – the caption on a Swiss postcard of 1914, depicting a Swiss militia man being asked by the Kaiser what the Swiss would do if he sent an army of half a million Germans against the quarter million Swiss Army.